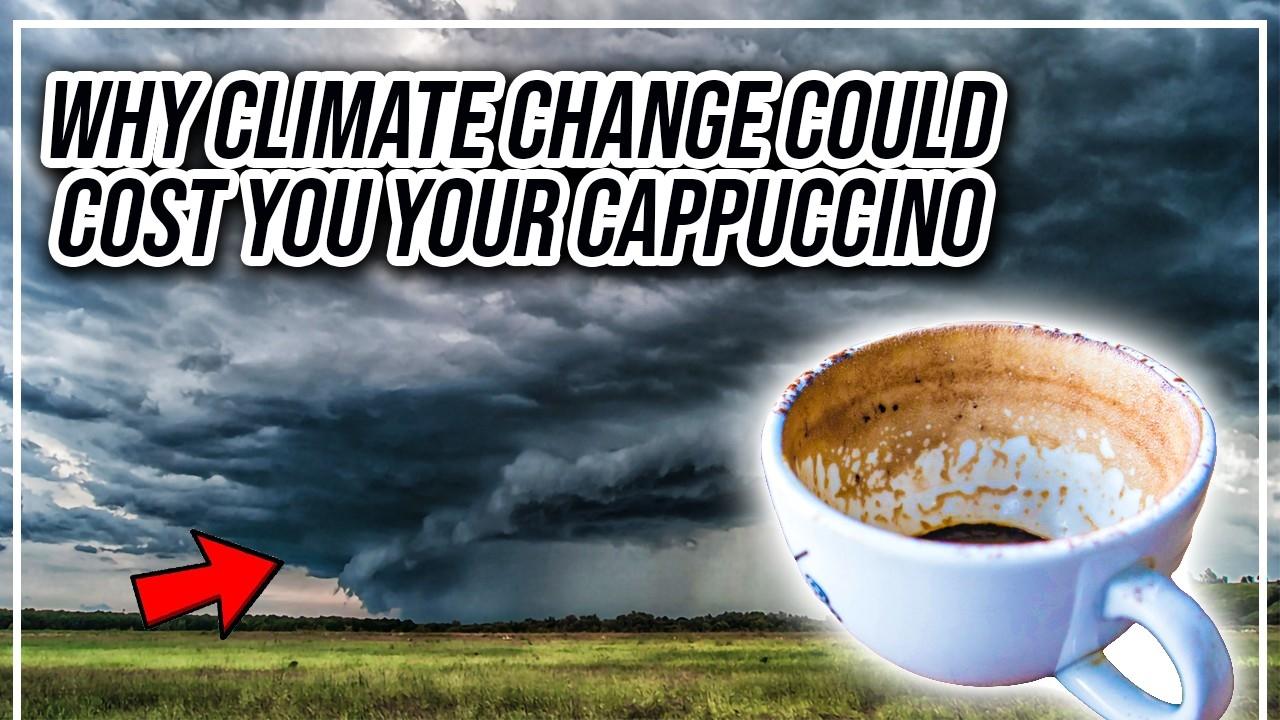 Like many of you, I look forward to my daily cup of coffee and so do a lot of other people too. In fact, the statistics suggest that 2.25 billion cups of coffee are consumed every day. But apart from the health benefits of coffee, as well as the simple pleasure and the social issues as well about coffee consumption, climate change poses a very real threat. And that's what I want to talk to you about on this episode of The Mould Show, because a recent paper came out in October, 2020, focusing on some of the risks to the coffee crop and the number of cups that we have available to us. And climate change is predicted by 2050 to reduce the available land suitable for coffee growing by up to 50%. And so that is what I want to focus on in today's live stream.

Why climate change could cost you your cappuccino. And to orient you, what I'm going to be doing today is going through some of the key facts and figures surrounding coffee. Then we're going to be looking at some of the new emerging research, also in the literature that is focusing on the health benefits of coffee consumption. Then I'm going to be taking you through some of the microbiological threats to the coffee crop. And this is mainly due to changes in the wild weather, increases in temperature, increases and decreases in rainfall and how that impacts on the fungi, which are found growing on coffee. And also as people move to different areas to cultivate coffee, how the different types of fungi also change. How this impacts on the production of mycotoxins and how those mycotoxins can get into your favorite cup of coffee. And then we're going to finish with what you and your doctor can do if you are suffering from mycotoxin contamination. And it's not all from coffee, a lot of other crops are also susceptible to contamination with fungi. And that's why mycotoxins are regulated.

But if you are needing to detoxify, we're going to go through some of the latest research focusing on what you and your doctor can talk about to potentially detoxify from bad coffee. And as my local coffee purveyor downstairs said to me, just before I came up to do this live stream. He said, "Make sure to mention that you need to maintain the coffee equipment." He cleans his three or four times per day. Exactly because you don't want contaminated coffee grounds getting into your coffee. And this is the whole issue around care and maintenance around coffee. So, I'm going to get into it now.

So, let's talk about the eight facts about coffee that I need you to know about.

In Australia, the annual revenue of the coffee market is 7.8 billion Australian dollars. For every person in Australia, two kilograms of coffee is consumed. And the average cup of coffee is about $4. If we look at the stock market for coffee, there has been a 2% increase in consumption, moving from 2019 to 2020. There are essentially two types of coffee and they're called Arabica and Robusta. 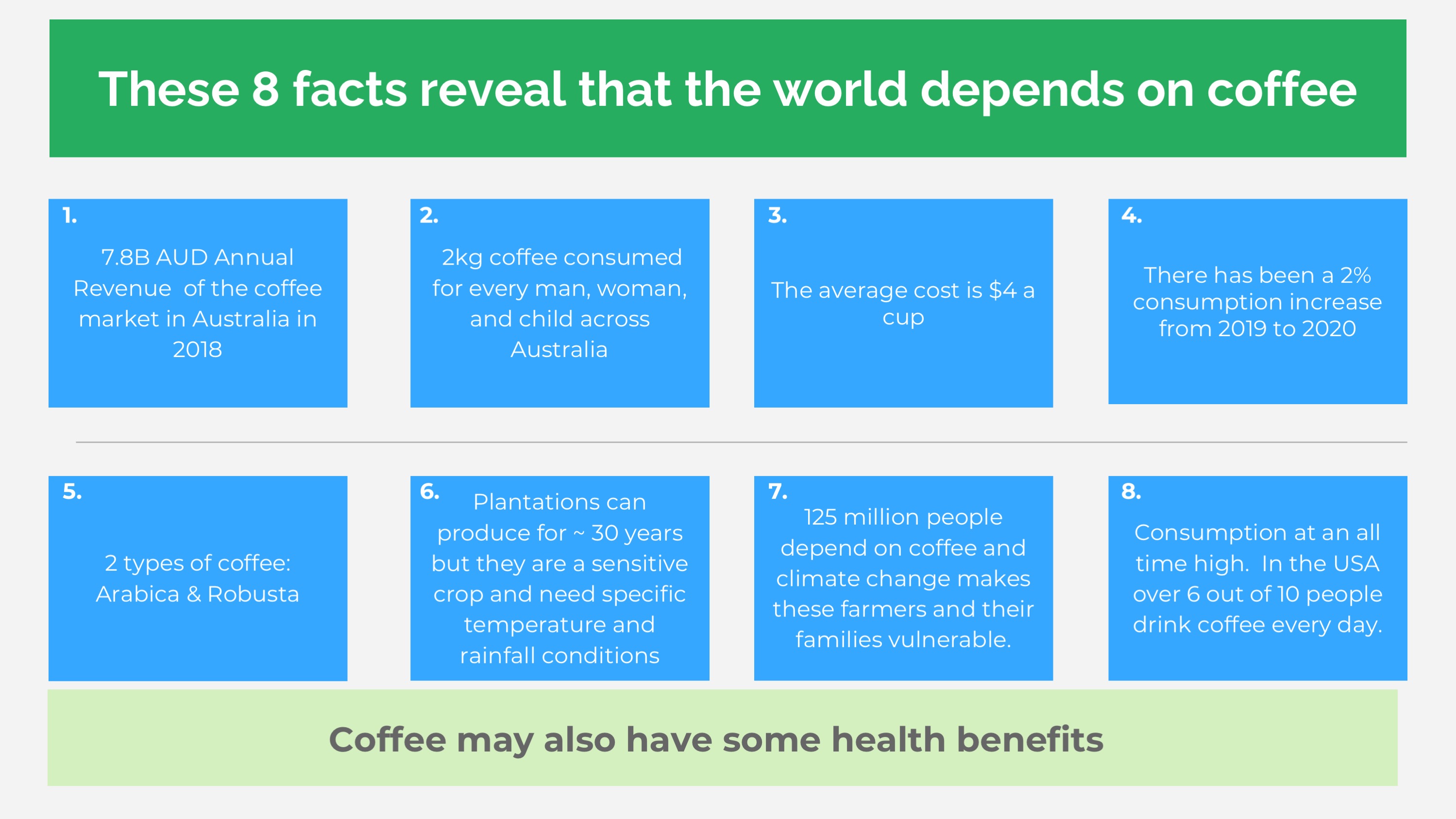 Now, when a farmer actually decides to cultivate coffee, these plantations can actually yield viable crops for up to 30 years. But the problem is that they are highly sensitive, and they need the correct temperature and rainfall conditions. Now, it's not just the impact on your local coffee shop that you need to worry about. There are 125 million people who depend on coffee and this very real threat of climate change means that this makes the farmers and their families quite susceptible to the impact of climate change. Now, if we look at other statistics, we find that in the USA six out of 10 people consume coffee, and it is the most consumed beverage after water.

But now, what are the other things that we need to be focusing on? Well obviously, there are some health benefits, not just the social benefits from consuming coffee. And we need to look into some of these. So, I'm going to quickly take you through the key health benefits from the research. And again, this is pulling from a 2020 publication from April earlier this year, that reviewed something called all the umbrella reviews. That is the randomized clinical trials, as well as those clinical and observational studies. And they showed that there were four principle benefits of coffee consumption.

So consuming coffee helps with a reduction in type two diabetes. I reduction in the prevalence of cardiovascular disease. It inhibits several forms of cancer and shows some extraordinary results regarding dementia and Parkinson's disease. But despite its benefits and our love and dependency on coffee, it is susceptible to a lot of these, as I said, microbiological threats. 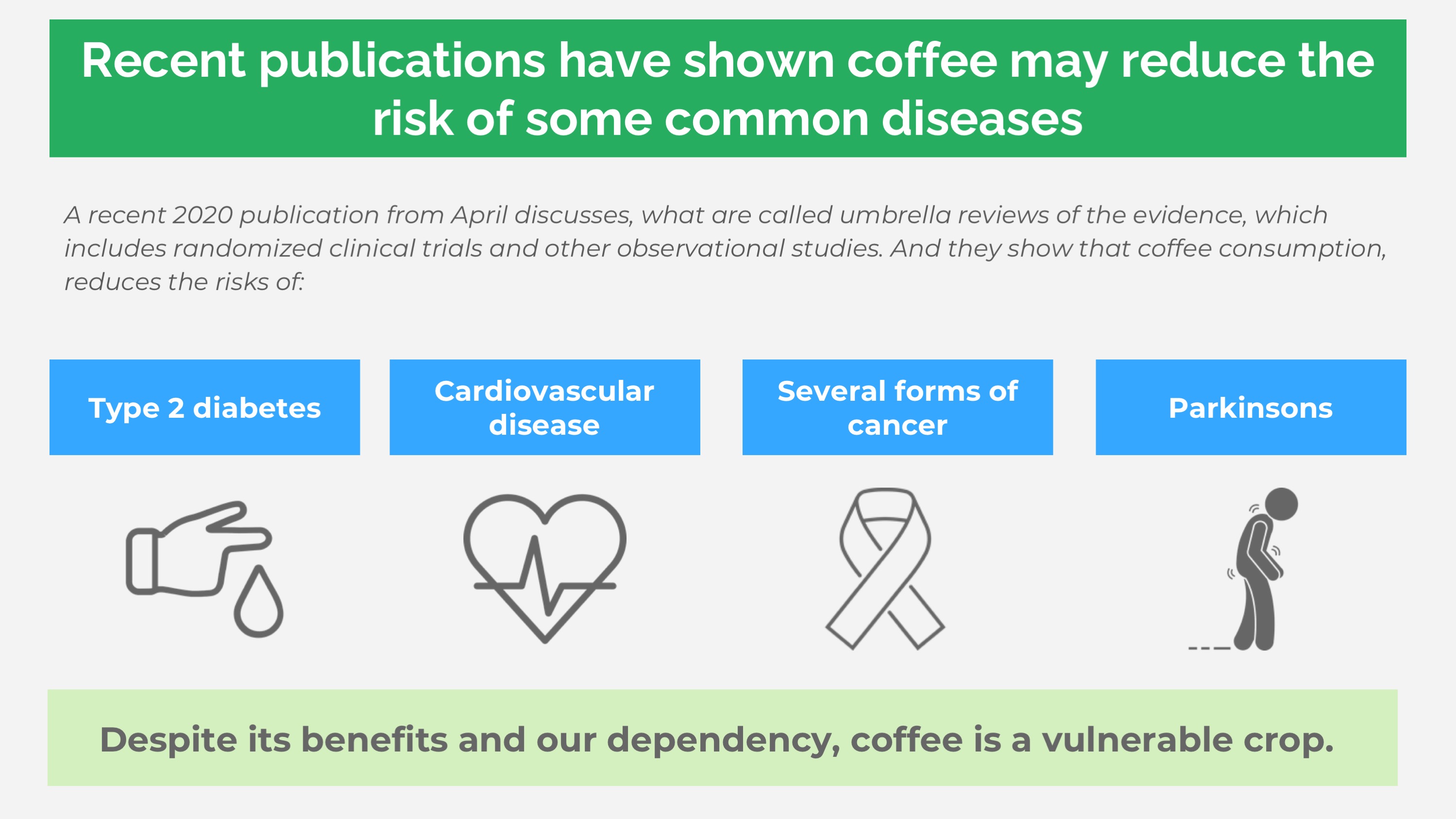 So, if we look at the map of coffee growing regions. As I mentioned, there are two dominant types of coffee, Arabica, and Robusta as well as farmers that choose to grow mixed crops. And you can see that the available geography suitable for growing this crop, isn't global. It is concentrated in certain locations, and this is why the impact of climate change is so significant.

So, if we look at the impact of this, we need to have a look at the fungal threats. And as I mentioned, coffee is vulnerable to fungal diseases because they thrive at increased temperatures caused by climate change. And what this means is that climate change is altering the types of fungi that cause fungal infection in the coffee crop. So, the research says that as temperatures increase, the production of mycotoxins by typical fungi found on coffee, such as Aspergillus flavus, is shown to be going up. Now, that is a really bad thing because we know that there are a group of, or a class of different mycotoxins, which I'm going to go back to that slide in the second. 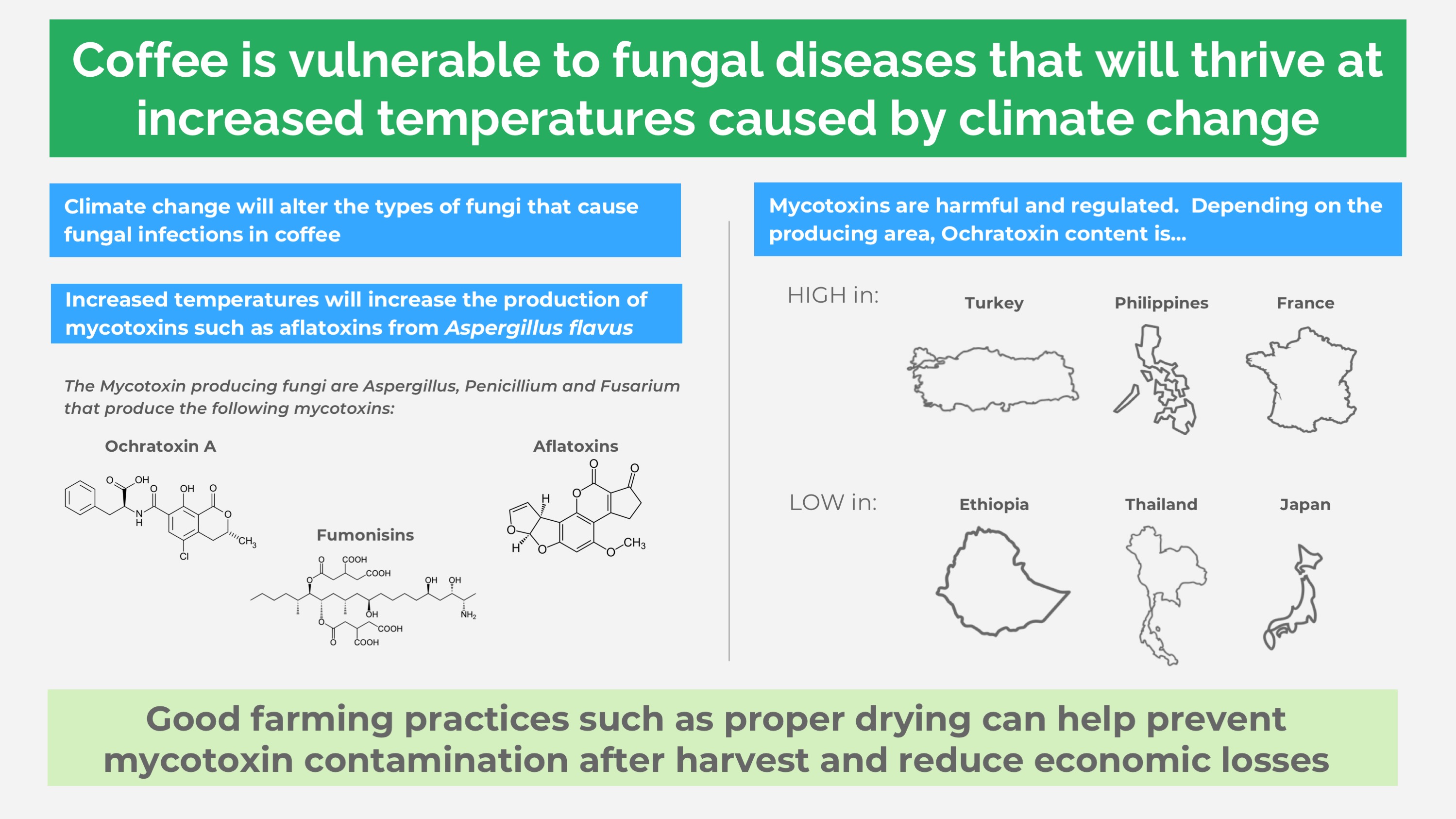 And each of these mycotoxins poses a different threat to people. And so, if we look into this, we can see that Aspergillus, Penicillium and Fusarium are the dominant three fungi that like growing on coffee beans and coffee grounds. And they are also the typical fungi, which grow inside water-damaged buildings. And so, we know that Ochratoxin A, Fumonisins and Aflatoxins are significant health threats to people. But again, it isn't happening globally. And if we go back to this particular map, we can see that there are certain countries which have more or less problems from this mycotoxin issue.

Now, what can these farmers do? Well, obviously good farming practices and proper drying of the crops and education improve the harvest quality and also reduce economic losses due to mycotoxins contaminating these coffee grounds. But we also need something a little bit better than that. And when I talk about regulation, you might've heard about something called Fair Trade Coffee. This is a certified cooperative, which works with farmers to improve farming practices, reduce the use of pesticide, encourage farmers to work with the local communities to make the logistics of getting the coffee to market and then into the food supply chain, optimized to reduce the time delays and hence reduce the opportunity for fungi to grow on the coffee and then eventually end up in our coffee, which we definitely don't want.

Now, if we look at what you can do, well, I mentioned Fair Trade Coffees. Obviously, the other issue, if you are susceptible to mycotoxins is to just minimize your contact with any crop or beverage, which could bring you into contact with moulds and mycotoxins. However, we need to also be aware that a recent study also just came out in 2020, which looked at people in Spain and their coffee consumption habits. And they found that if you stop drinking coffee, there is a significant association with health deterioration. And we definitely don't want that. 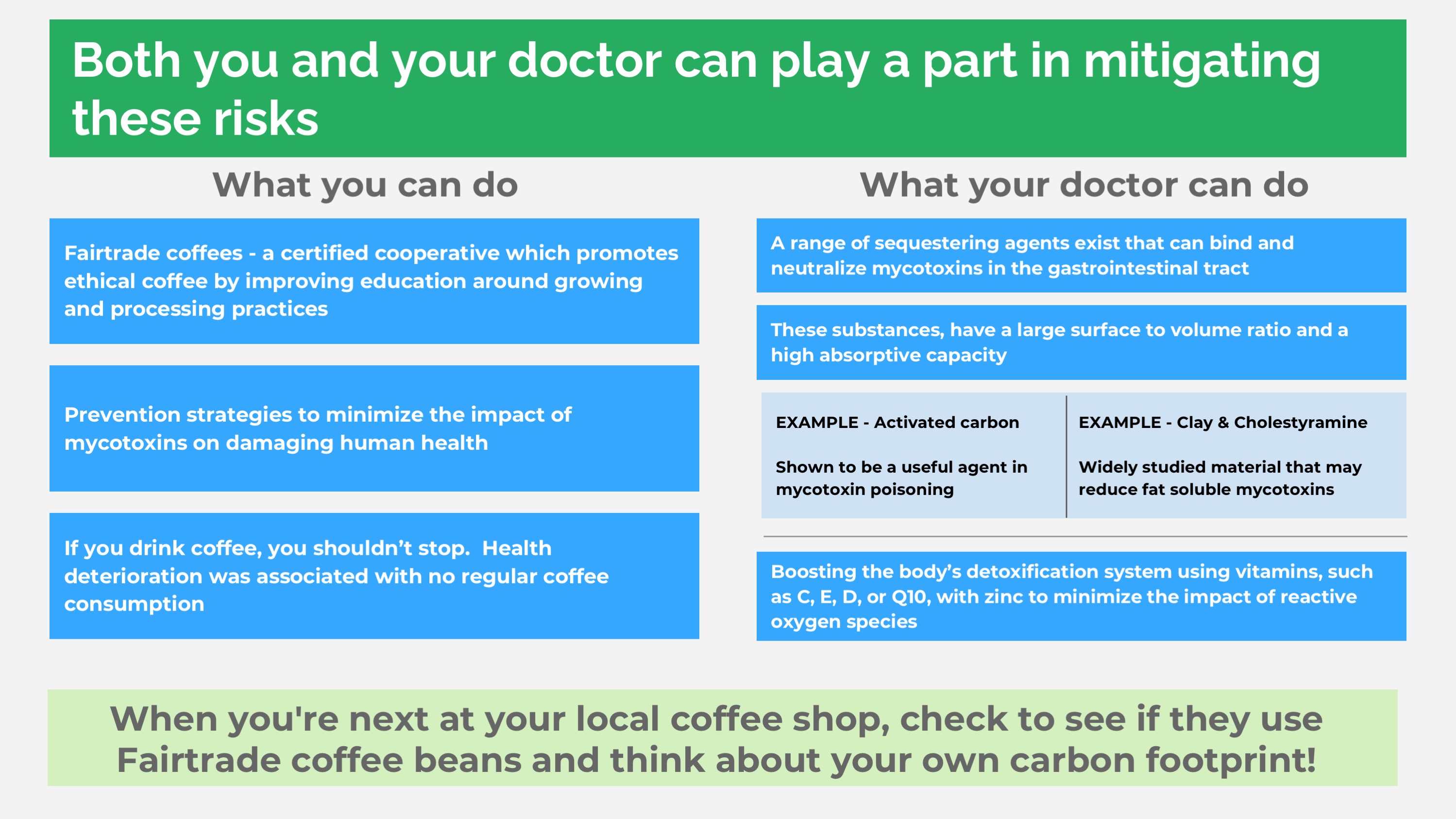 Now, people talk to me all the time about how they can detoxify themselves after exposure to mouldy environments or for that matter, after consuming beverages or foods with mycotoxins. And I suggest that you talk to your healthcare provider or your clinician. But on the right-hand side of this slide, I've summarized some of the key methods that you might want to discuss with your doctor about detoxifying these mycotoxins.

And this includes the use of a range of sequestering agents, which neutralize mycotoxins in the gastrointestinal tract. And usually, these substances have a large surface to volume ratio and a high absorptive capacity. And typical examples include activated carbon or charcoal, which is shown to be a useful agent in treating mycotoxin poisoning. Other examples include clay and Cholestyramine, which is a widely studied material that may reduce fat-soluble mycotoxins.

As well, you could consider boosting the body's detoxification system using vitamin supplementation, such as C, E, D or Q10 with Zinc to minimize the impact of reactive oxygen species. So, when you are next at your local coffee shop, check to see if they use Fair Trade Coffee. Talk to your coffee purveyor about coffee in general. I'm sure they are a wealth of knowledge and information about where their coffee comes from, why it's good and why above all, it's certified as having few mycotoxins. In any case, the call to action this week, same as always. If you've enjoyed The Mould Show this week, I'd encourage you to follow me and subscribe to my channel on social media. Next week, I'll be back with more public health information, stay safe and have a great week. Bye for now.