Can the mould in blue cheese be as harmful as mould in the house? 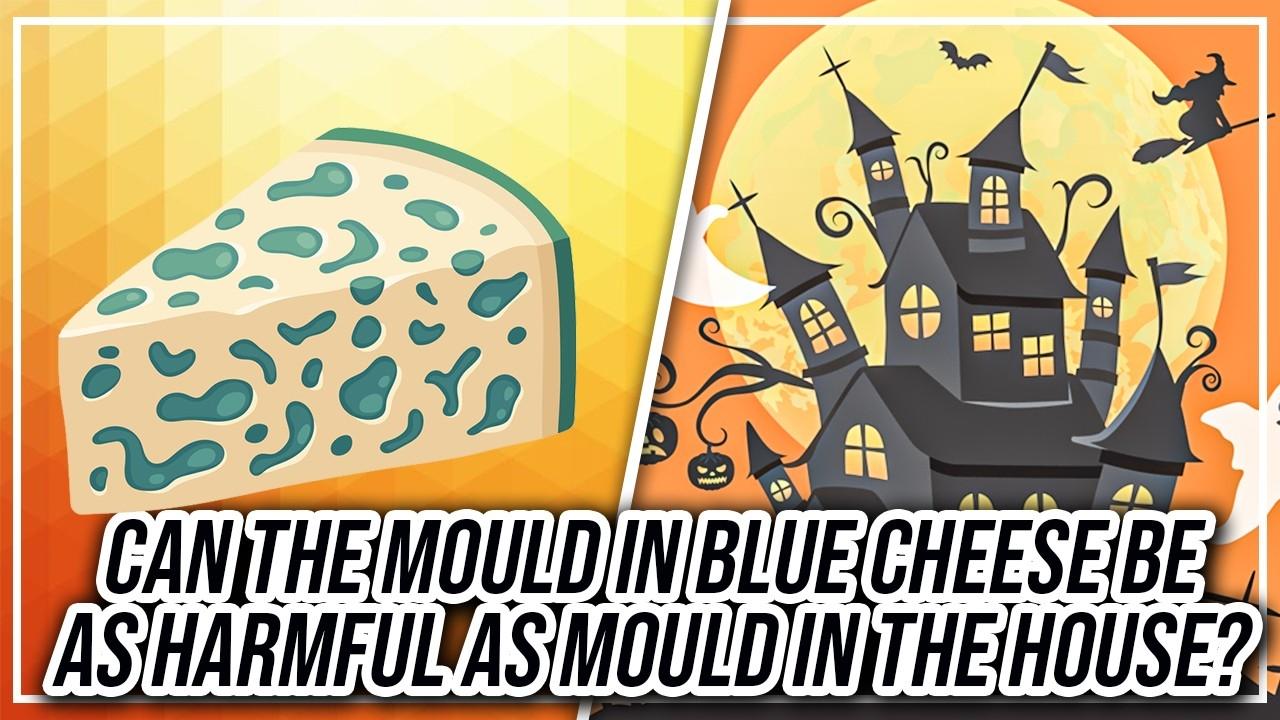 This week, I want to talk about a recent water damage and mould inspection that I was called out to do. And the reason that I was at that particular property was that the occupant had recently done something called an aspergillus serology test with her doctor and she'd gotten back some pretty scary lab results. And they showed that she had a really strong reaction to a particular fungus called Aspergillus fumigatus. That was the catalyst for why she called us in to inspect her property, to work out whether or not there was any realistic basis for her concern about being exposed to mould. 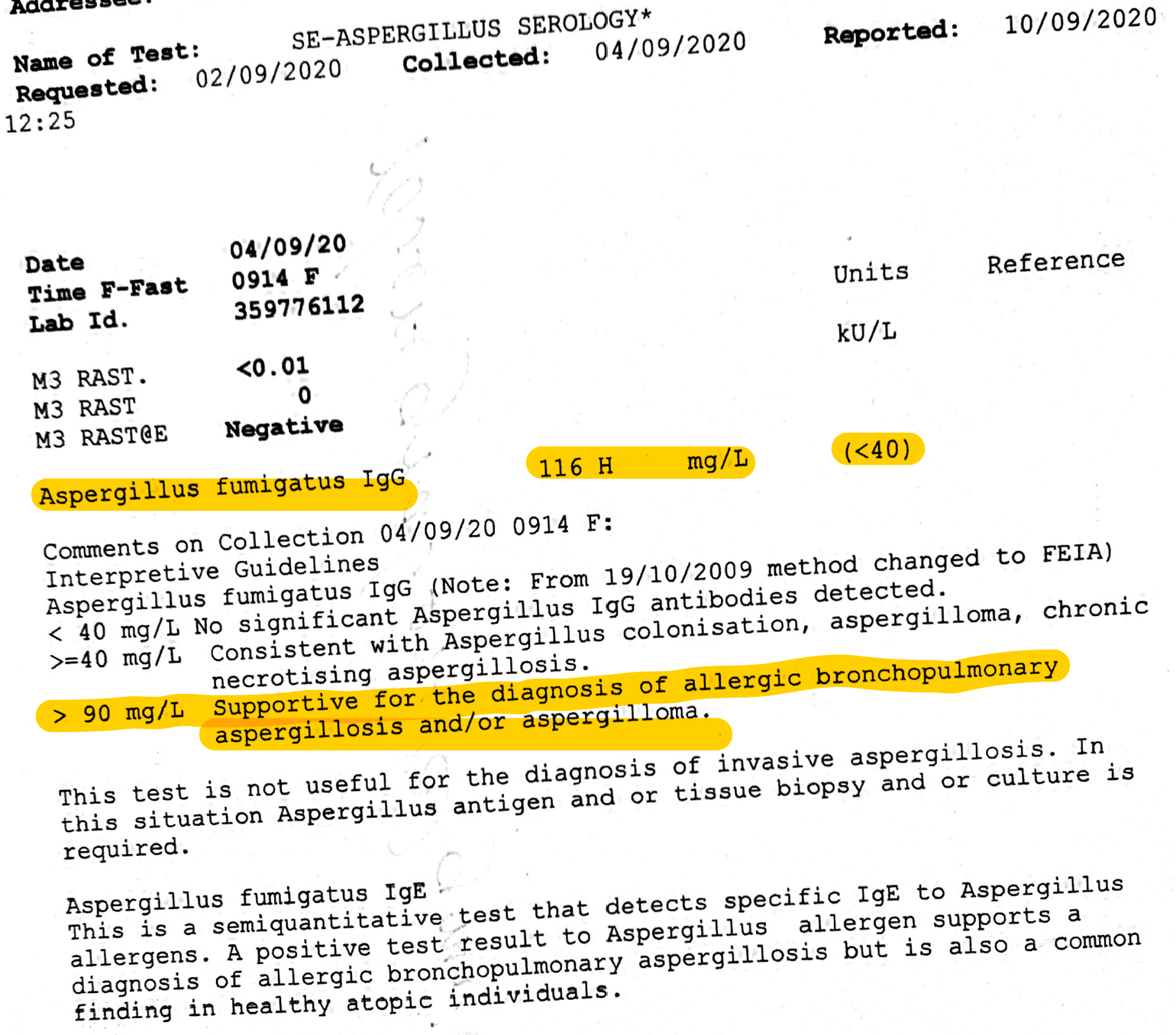 Now, what's really interesting about this case is that that's not an atypical reason for us. We're commonly called out to do water damage and mould inspections because people do have a legitimate cause for concern, and often it's these types of lab reports that clinicians use to connect the dots, as it were. But what's really interesting about this particular situation is that she said to me, a little bit guiltily, that she loved eating blue cheese. And I said to her, "How often do you consume blue cheese?"

And she said, "A couple of times per week."

And she said, "The last couple of years, and especially during the COVID lockdown." Then she asked a specific question. If I do, in fact, find any mould in her property, or even if I don't, could it be the mould in the cheese that could be contributing to her symptoms?

In any case, that is the topic of this week's live stream. Can the mould in blue cheese be as harmful as mould in the house? And you're probably thinking no, it couldn't happen to me. But I'm going to quickly show you the lab results just to confirm that this in fact is true.

So what it showed was this something called Aspergillus fumigatus IgG. I'm going to explain to you in this live stream what IgG is and how this relates to allergy. And what I've highlighted in yellow here is the fact that the lab technician confirmed that this particular individual has a very strong response to Aspergillus fumigatus in her blood. And in my role as a microbiologist, I attended the property to determine whether there was any microbiological findings that would be supportive of this.

So, I'm going to kick off now with the fact that we do know that early life environmental exposures definitely do influence the immune response and the development of allergic diseases. And there are various different papers, one most recently from late last year, showing that cheese consumption at 18 months of age shows a strong protective effect, especially for skin rashes and food allergies, but not for rhinitis. That is a stuffy nose or asthma. 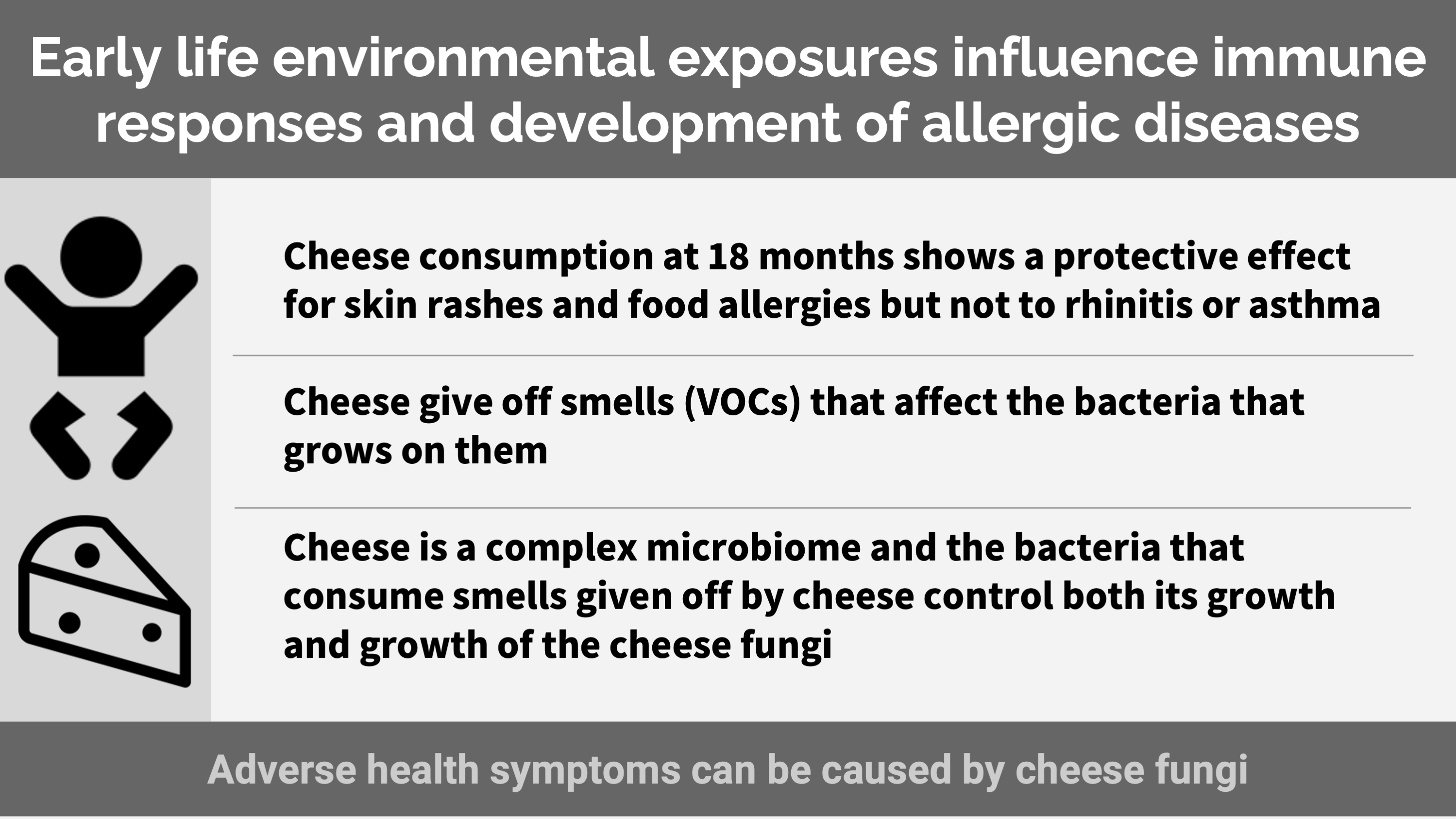 Now, I need to talk to you about something that is characteristic to cheese, and especially blue cheese, is that it gives off smells. Now these are definitely called VOCs. And the last couple of weeks we've been talking about various different microbiomes. And there's some breaking research just came out last week, showing that in the microbiome particularly of blue cheese, there's something called a rind, and this is colonized by not just fungus, but bacteria as well. And the smell, the characteristic smell of blue cheese gives off these VOCs, and the research shows that the bacteria in the rind consume the smell as a food source.

So there's a symbiotic relationship between these two groups of microorganisms, which contribute to their odour, but also contributes to the taste and texture. So there's a lot more going on in cheese production as well. So this is the case for.

Now, we need to talk about some of the issues about allergies. And to do that, I'm going to be explaining the differences between the IgG, which is the lab report showing the IgG reaction to aspergillus fumigatus. I'm going to be spending a few minutes explaining this. So an IgG reaction, there's something in your blood called immunoglobulin G antibodies, and these help us identify, neutralize, and destroy foreign objects like bacteria fungi viruses and other quite large molecules.

Now the majority of food intolerances are IgG and the reaction to the food could be delayed, and sometimes the severity of the food intolerance decays or declines over time. Now contrast this with an IgE reaction. Now this is caused by immunoglobulin E antibodies, and these are true allergies with immediate symptoms, and usually, these conditions stay with the individual forever and they are very serious. So in summary, IgE symptoms are immediate and long-lasting, while IgG symptoms might be delayed and could decrease over time. 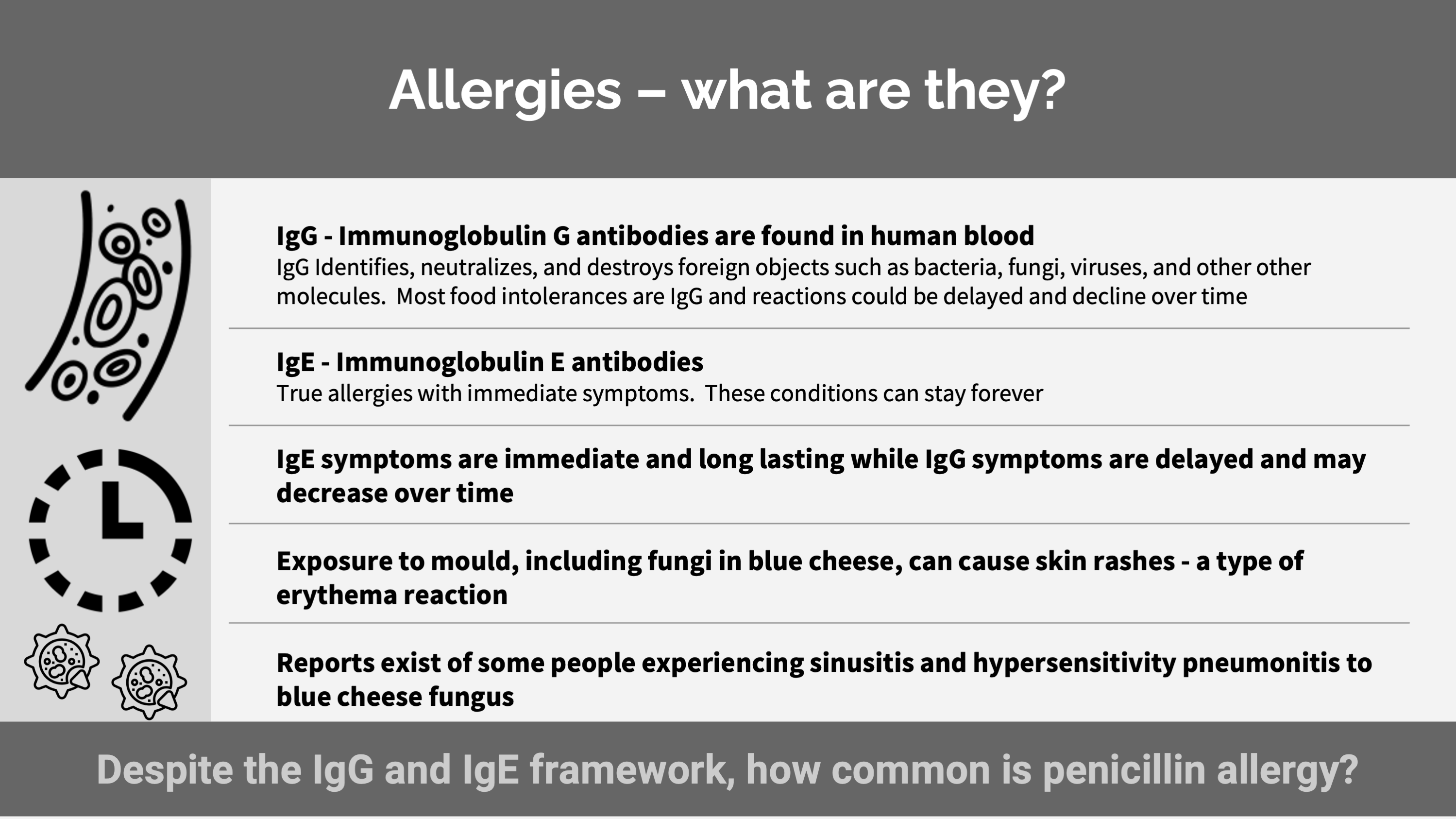 What do we know from the research literature? Well, the exposure to the mould in blue cheese does have a connection with definitely skin rashes. And I can find a large number of research papers that are all linked in the show notes, showing various different skin rash reactions, even sinusitis and other types of adverse health problems occur with people who consume blue cheese. Usually, those individuals are in high-risk environments, such as the production plants for blue cheese manufacturer or packaging. However, some people do show these quite severe reactions.

So despite the IgG and IgE framework that we just discussed, how common is penicillin allergy? Because penicillin allergy is something that is related to the penicillium mould, but the penicillium that is responsible for or used in the production of blue cheese, it's the same genus, but it's a different species to the one which makes the antibiotic. But we do need to talk about allergies to the antibiotic penicillin, because it is related to the fundamental question that we're discussing today.

So penicillin allergy is over-reported by individuals, but when it is true, it is very serious. And in fact, a recent publication that just came out was reporting on the incidents of penicillin allergy in the United Kingdom. And out of 2.7 million people who reported, self-reported that they were in fact allergic to penicillin, 95% of those self-diagnosed beliefs were in fact found to be incorrect. And this has a profound impact on infection control and the spread of antibiotic resistance within the community. Because if an individual says that they are allergic to penicillin and it turns out to be incorrect, that clinician may in fact prescribe broad spectrum antibiotics instead of a specific penicillin.

The publication went on as well to say that there is a shortage of trained allergists to actually confirm whether or not an individual is in fact truly allergic to penicillin. Now, I also need to say something else because we've been focusing on microbiology, but in cheese production, oftentimes it is it's a synthetic appeal or how it presents to the individual. And some cheeses are brightly yellow coloured. There is a compound called annatto, which is unfortunately often added to some cheeses to make them quite bright yellow. Now, this is a well-known allergy-inducing chemical, and you should be aware of that as well. 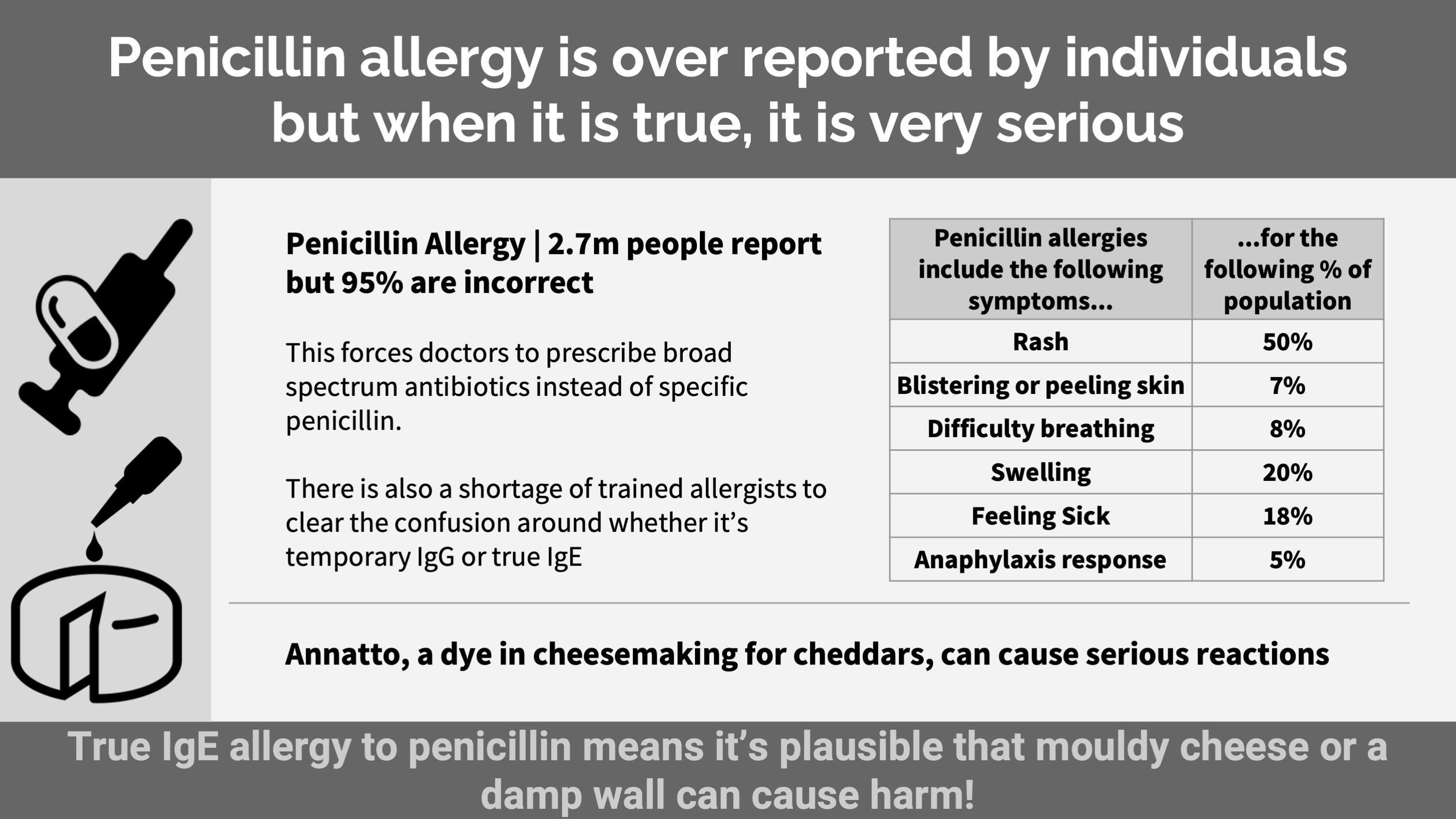 But getting back to some of these statistics about penicillin allergies, we find that in the small group of people who show a true IgE response to penicillin, 50% of the individuals will show a rash. 7% will present with blistering or pealing skin. 8% will experience difficulty breathing. 20% will experience some talk swelling. 18% might feel sick or nauseous. And 5% show an anaphylaxis reaction. And it is this last reaction, the anaphylaxis, which comes on extremely rapidly and is very serious. This is true IgE antibody response.

So getting back to the original question, can the consumption of blue cheese make your experience of hypersensitivity or allergy in a water damaged building worse? Probably not. However, if you have an IgE sensitivity to penicillin, it is definitely plausible that you could in fact react to the mould in blue cheese or in fact the mould inside your water damaged building.

In any case. My name's Dr. Cameron Jones. If you've enjoyed this episode of The Mould Show, I'd encourage you to follow me and subscribe to any of my social channels. Have a great week, stay safe. I'll see you next week. Bye for now.

Burrows, T. (2018). Boy with allergy died 'after pupil chased him & shoved cheese down his shirt'. Retrieved 25 October 2020, from https://www.thesun.co.uk/news/7297440/schoolboy-13-killed-by-allergic-reaction-after-classmate-chased-him-with-cheese-and-put-it-down-his-top/