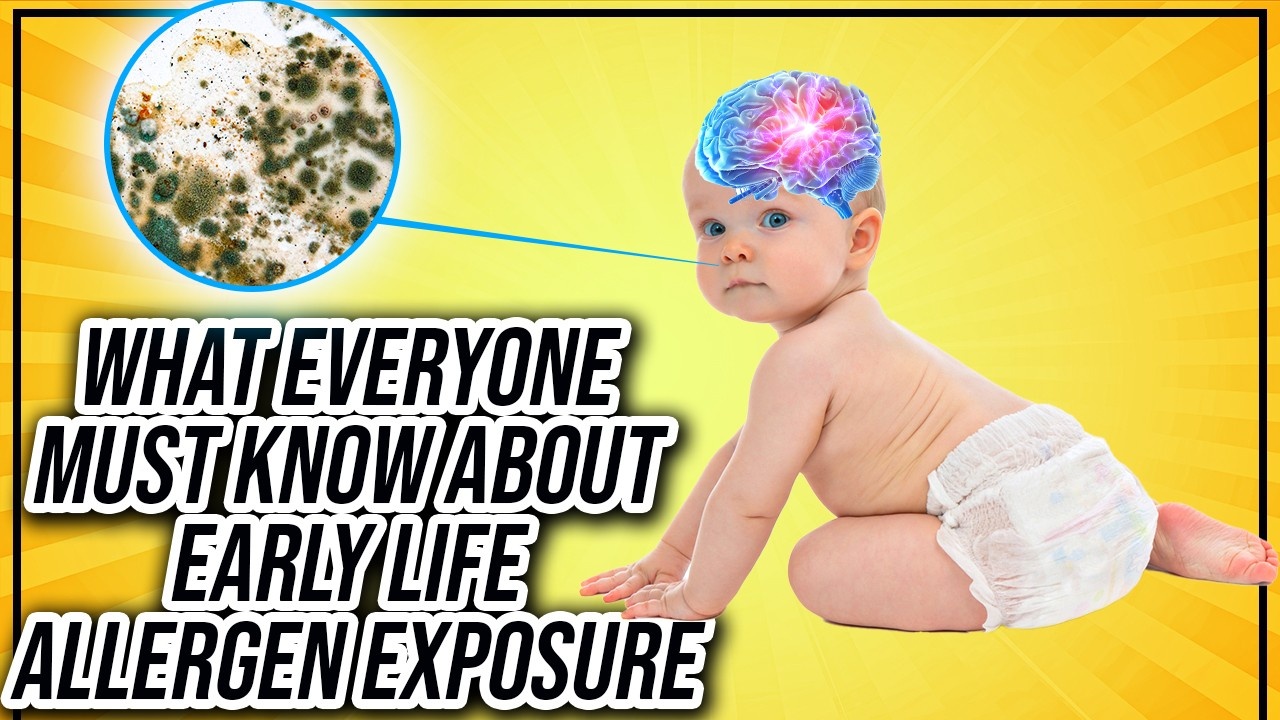 Hello and welcome to season three of The Mould Show. My name's Dr. Cameron Jones, and I'm an environmental microbiologist. And to kick off this year, I want to talk about allergy, and I want to talk about specifically allergens in the environment. And the reason for this is some of my clinician friends have referred some of their patients to me in the last couple of months for exposure to unwanted environmental toxins. And the reason for their referrals for home inspections is because those patients were experiencing unwanted seizure activity.

Yes, you heard me right. Not just allergic rhinitis or a running nose or contact dermatitis or an itch, but seizures. And therefore, what I've done is I've gone into the research literature, I found some key papers, and I'm going to be reviewing some of the case studies that the medical doctors have written up about patients who have been exposed to water-damaged building interiors and gone on to suffer seizures and a whole host of unwanted symptoms. And therefore, today we're talking about what everyone must know about early life allergen exposure.

And what we're talking about here is children who are carried in the womb in potentially unsafe housing conditions. What happens to those children in early life and then later on in their development? This groundbreaking publication is showing that when an early life immune system is challenged with these triggering products like mould, like cell wall fragments, like volatile organic compounds, and mycotoxins, these cell products cause real stress on the immune system, and this is causing a whole host of serious problems.

Today, how I'm going to tackle each of these case studies is first review the symptoms, because that's the reason that these individuals were taken to the medical practitioner in the first place. Then the doctor has usually performed some type of allergy test on the patient and then has recommended home inspection to detect episodes of water damage, especially if the family don't know about it. We're going to go into those situations where examples of water damage are known and also water damage was not known.

We're going to go straight into case study number one. And this involves a two-year-old boy whose mother was pregnant whilst he was in the womb. Now, the environment was known to the family and they knew that they were living in a house with water intrusion. There was significant visible mould present. There was construction decay, and there was also evidence of mice present in the property. The symptoms that were being presented to the medical practitioner included pneumonia, allergic rhinitis, asthma. 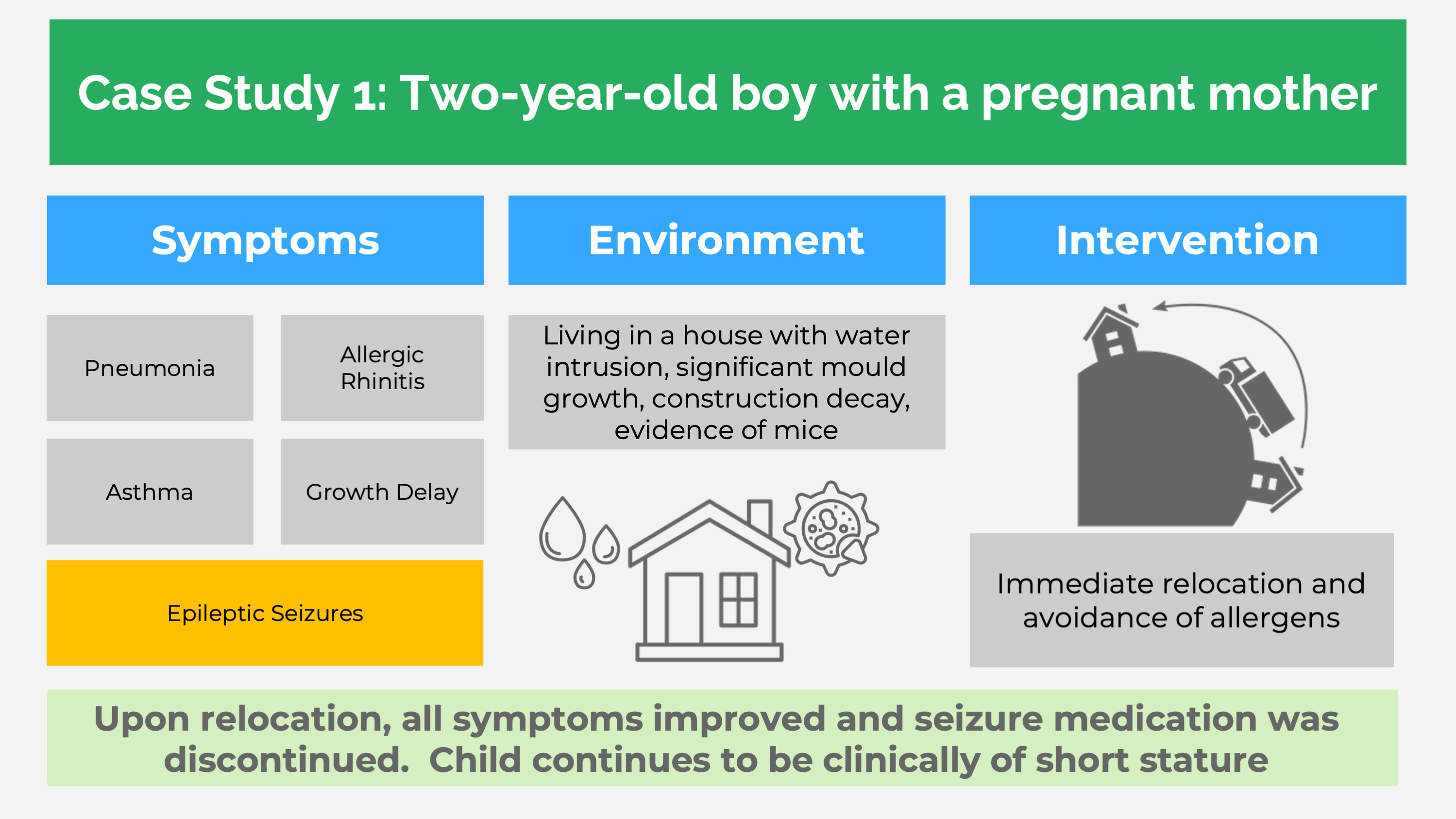 There was something called growth delay and this is quite a serious issue, and I'm going to come back to this in a moment. But the overwhelming problem that was being experienced by that particular boy was epileptic seizures. The doctor did allergy sensitivity testing, confirmed that the child was in fact allergic to mould, and recommended immediate relocation and avoidance of allergens. And when the family relocated, all the symptoms improved and the seizure medication was discontinued. However, the child remained short.

There was an impact on the ability of the child to grow. This is something which is being written up in the literature, and they talk about the child being of short stature and below the fifth percentile for his age. That just emphasizes the severe impact that unhealthy living conditions can have on growing children.

We'll move on to another case study now, number two. This involved a 20-month-old boy that was born with normal weight and height. But soon after birth, the child began crying inconsolably.

He also had symptoms of allergic rhinitis, a skin disorder called eczema, and started showing rashes. And these rashes got worse over the first four months of the family living or continuing to live in this water-damaged building. The child also had difficulty swallowing and was showing a typical head and leg movements that was consistent with seizure activity. 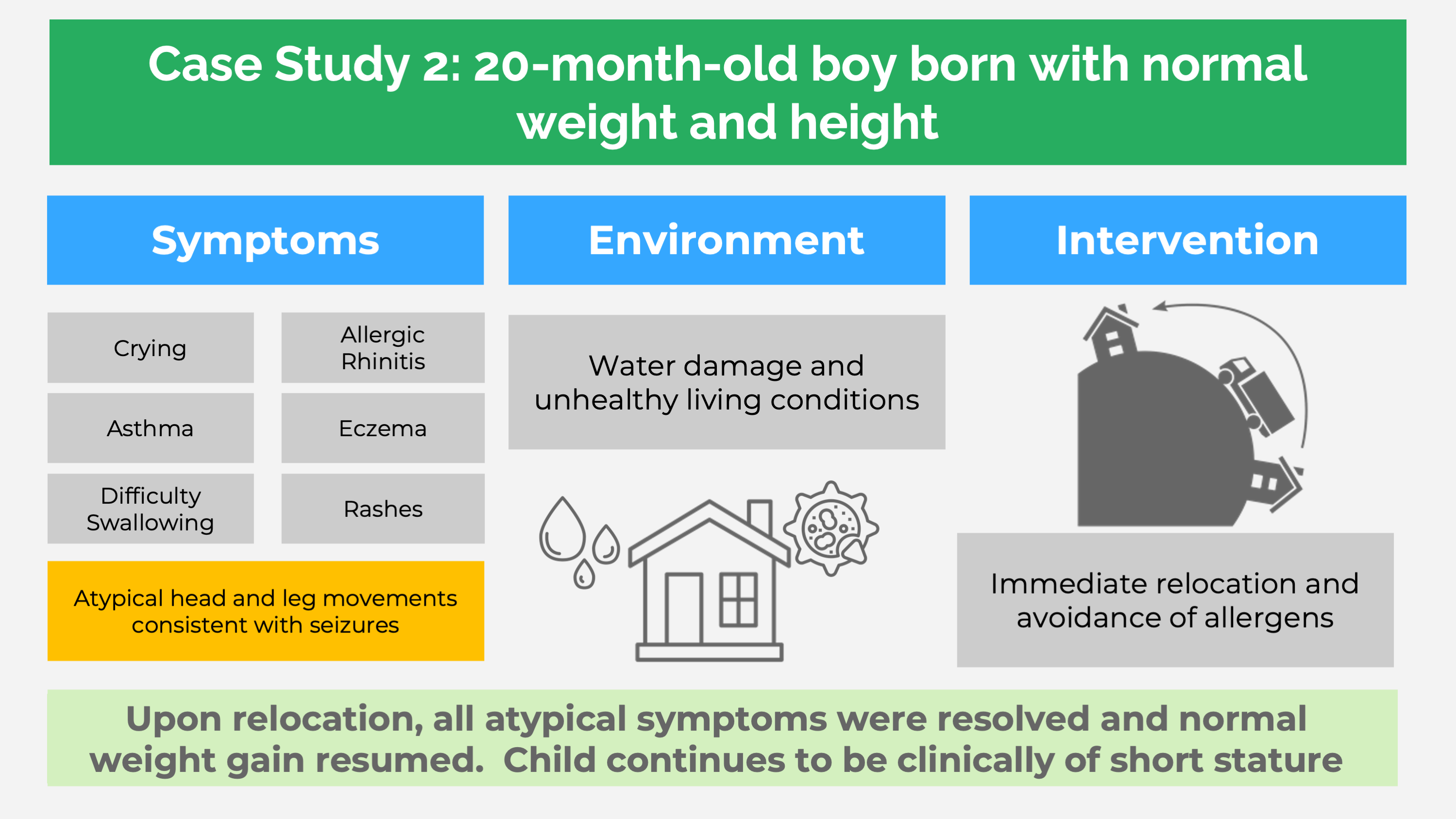 Again as before, the clinician carried out allergy testing on the child and confirmed that he was in fact allergic to mould and a range of other allergies as well.

But the doctor recommended immediate relocation and avoidance of the allergens. And upon relocation, all of the atypical symptoms were resolved and normal weight gain resumed. However, like with the first case study, the child remained on the lower end of the height. And that is a really serious problem. Not only did the child experience unexpected and unwanted seizure activity, but it caused interference with his growth response and he remained of short stature.

You must recognize that these were patients seen by different doctors that just happens to be written up in this one publication.

Now, if we take the third case study, this involved a six-year-old boy whose symptoms began at the age of two, where the family moved into a water damaged or impacted home. This is a really interesting case study because this involved a normal child whose family then moved into a suspect or known water-damaged building. The symptoms here included otitis media, which is an ear infection.

The child also had allergic rhinitis, but he was showing severe learning problems and was diagnosed with a learning disability. He had developmental delay, a speech impairment, and ADHD. And again, he had episodes of epilepsy. The doctor knew after a home inspection was performed on the property that there was continuous water damage and significant mould growth that they couldn't see. This child was also allergy tested and confirmed that mould was the trigger, and the doctor recommended immediate relocation and avoidance of allergens. 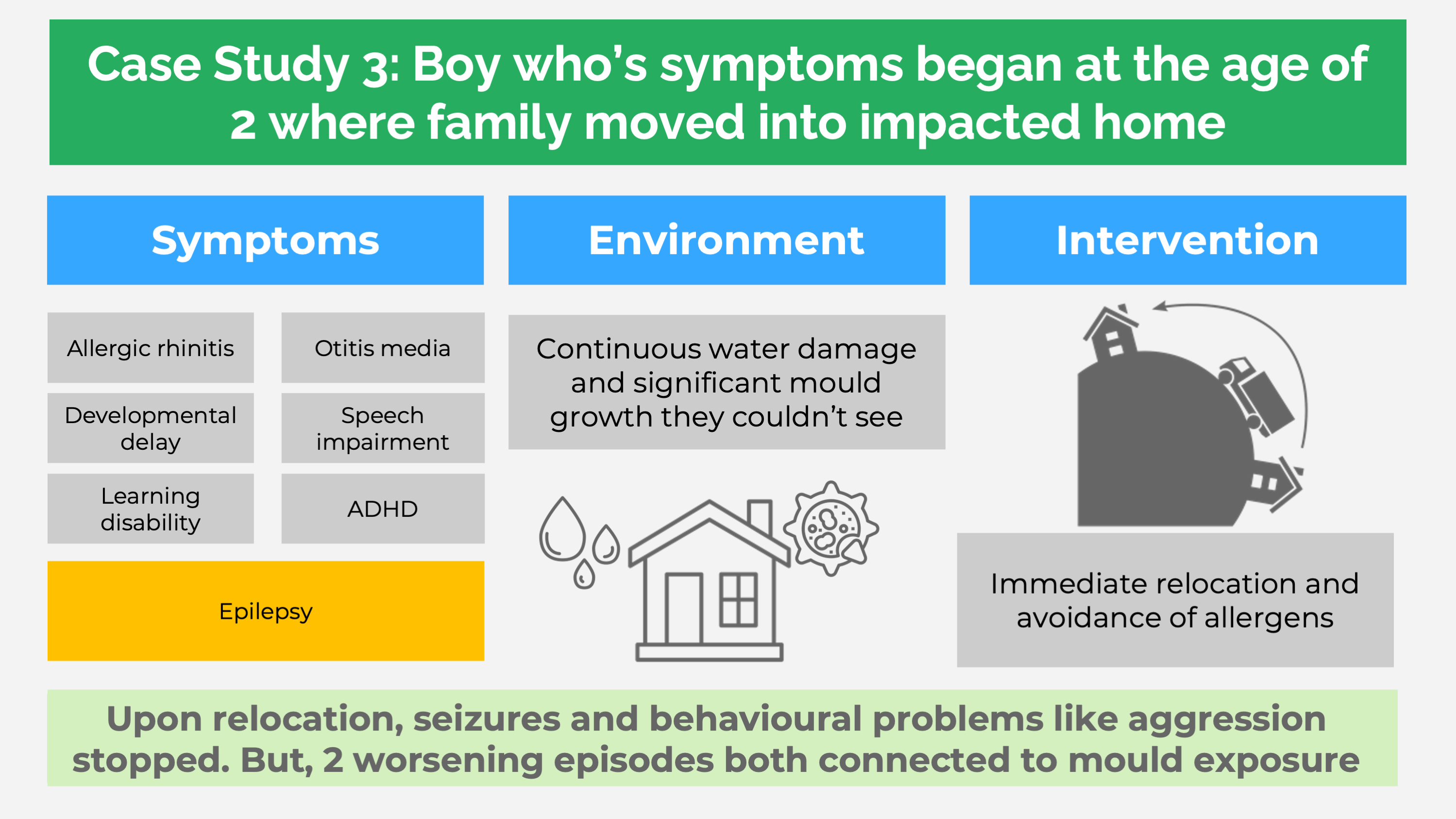 When the family relocated, the seizures and the behavioural problems like aggression stopped. But when the family moved yet again, if the child was triggered by exposure to water damage or mould, his symptoms immediately got worse. Now, you might be thinking to yourself, "Maybe these are outlier events." Well, I don't think they're outlier events because this is a tail end of 2020 publication in the medical research literature.

Last year, I would have received at least half a dozen referrals to do home inspections on clients or doctor's patients who were experiencing seizures. And this is certainly something that in the last decade of me doing mould inspections pretty much throughout each and every week, seizures is something new. I haven't seen this with so much regularity as in the last 12 months. I wanted to bring this to your attention. You might be thinking, "But why is this occurring?" So let's look at some of the conclusions that the researchers and doctors concluded.

And they stated that in all cases, exposure to unhealthy living conditions resulted in a similar constellation of symptoms and that relocation or mould avoidance was the only solution to help alleviate these symptoms. But why? The doctors state that the developing immune system can show an aggressive response to environmental danger signals and that this then causes a prolonged release of cytokines, which is caused by the allergic response. 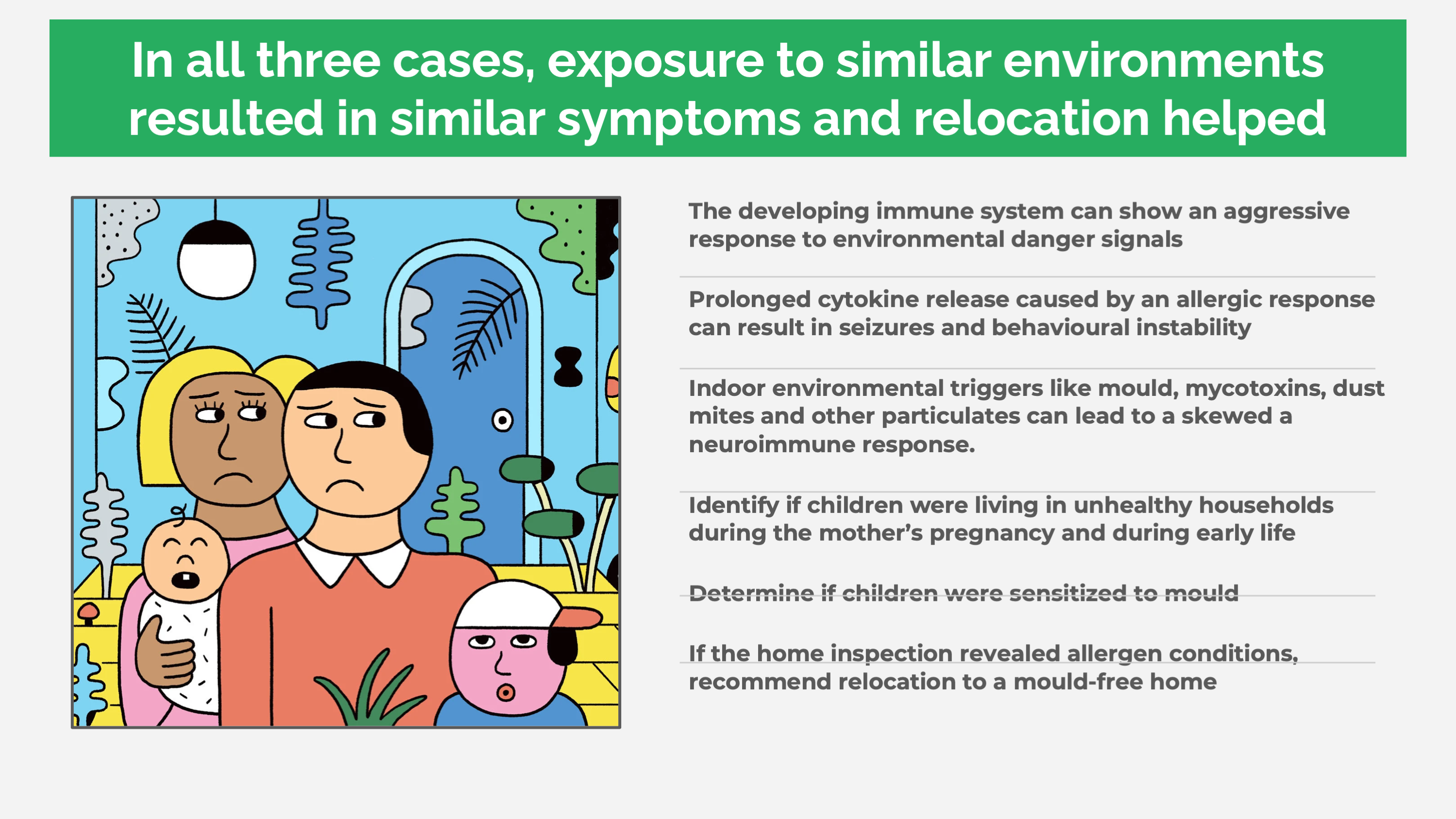 And then this goes on to cause seizures and behavioral instability like mood disorders, learning disabilities, other behavioral issues. And that those triggers like mould, mycotoxins, dust mites, and other airborne particulates can lead to a skewed neuroimmune response. It's a neuroimmune response, and that's the key terminology here, that it affects the way in which the body and the brain respond to an allergen reaction causing an immune cascade, which leads to these developmental problems. Seizures are not the only immediate response.

What about the short stature? So let's continue to review how you can take advantage of this information. The doctors in all cases recommended home inspection to confirm the hypothesis that the child had in fact been exposed to water damaged buildings, and that mould was in fact a triggering problem. They had to determine if the children were living in an unhealthy household during the mother's pregnancy or during early life. That is the prenatal to two years, as well as the two to five year period. The doctor needed to determine if the child was sensitive to mould.

And if the home inspection confirmed that the home was in fact showing signs of unhealthy levels of mould, then they needed to vacate. I should add that mould remediation in most cases is successful in returning a water damaged or mould effected building back to a normal indoor mould ecology. But in those situations where families with children who present with complex symptoms, they need to be aware that they should follow their doctor's advice and not necessarily make do with knowing that the home is mould-free.

What are you to do? Well, if you're at all unsure, get your home tested, because no one wants epileptic seizures, no one wants unwanted health symptoms in the first place, but also imagine if short stature were linked with mould exposure well beyond the couple of case histories here. Food for thought, isn't it? Anyone who works with children or rents properties to children who are of early age up to five, or any pregnant people who are considering moving into a property, beware. Look out for signs of mould and water damage.

And if your child is experiencing any type of unwanted symptoms that could potentially be aggravated by environmental toxins, go and see your medical practitioner and get their advice. But when in doubt, get your home tested. In any case, I'll be back next week. Bye for now. See you.