The ugly truth about bath toys: mould, yeasts and bacteria 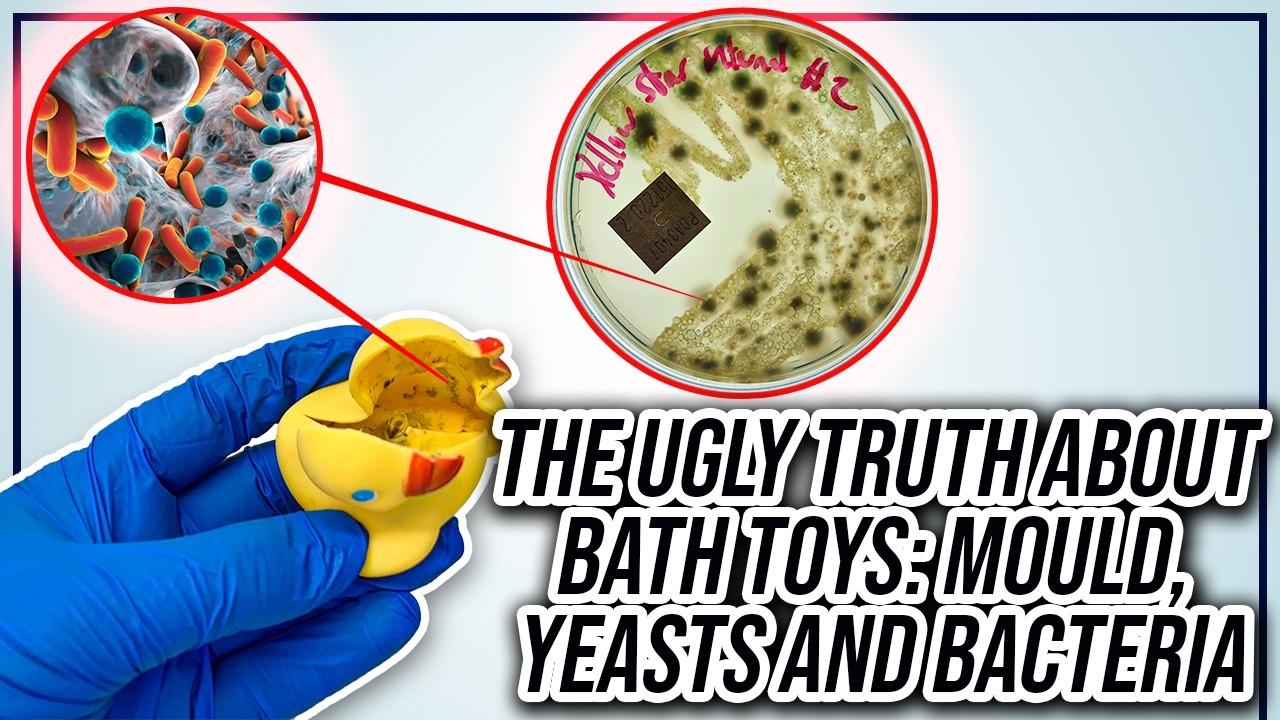 Over the next five minutes, we're going to be talking about bath toys. That's right. This is The Mould Show. And each week we focus on another aspect of public health. And earlier this week, I appeared on The Morning Show on Channel Seven, talking about the risks from bath toys.

Now, the reason for this was that there had been a number of new stories linking bath time and very serious infections. And one that was brought to my attention was a mother of a little boy who was playing with one of these typical bath toys and he squinted himself in the eye. And that's half the fun of bath toys and face it bath time is supposed to be fun apart from getting clean. So in the next five minutes, we're going to be going quite quickly through some of the reasons why bath time plus plastic bath toys might be cause for reconsideration for a lot of parents and grandparents. And especially as we approach Christmas and you're considering potential stocking fillers, you might want to think twice about the types of plastic toys that you're considering for your children.

And I want to tell you a little bit of the findings. Today what we're going to be doing is we're going to be talking about the ugly truth about bath toys, mould, yeasts, and bacteria. And when I first heard about this story, I was quite taken by the really ugly examples of biofilms that when parents are concerned, parents cut into their bath toys and it doesn't have to be a rubber duck. They've been some very interesting stories about giraffes that have been cut open. They've seen this very black gunky material. Now I did the same thing. I got a group of bath toys, cut them open, and sure enough, approximately 70% of the toys had quite considerable and obvious biofilms.

Now, when these were swabbed to Petri plates, we were able to get some quite nasty bugs growing. And I want to talk to you about these bugs now, but firstly, I want to show you some typical examples. So I'm going to talk you through how these Petri plate photographs were obtained. And so in the lab, I cut into the plastic bath toy. That's not rocket science, but swabbing that onto various different types of Petri plates allows us to visualize what is able to grow on them. 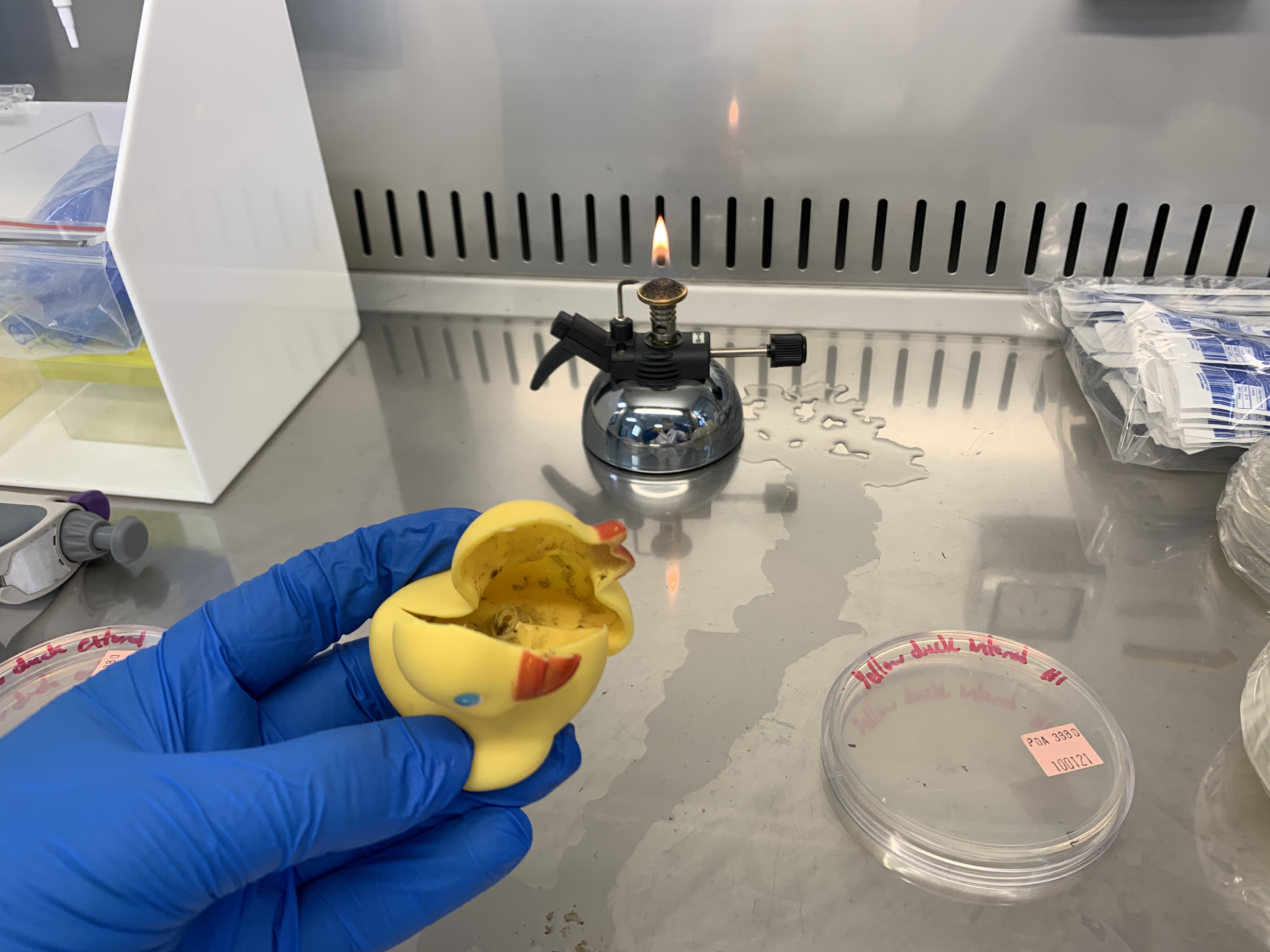 And as you can see from those photographic images, it's really easy to culture out some really quite serious nasties. And on the right-hand side, you can see the yellow duck internal. We took a couple of swabs and what was quickly revealed was a group of lots of bacteria. So although everyone thinks of the biofilms inside the plastic toy as being mould, you need to recognize that it's actually a complex biofilm and that this biofilm is very much like a carpet or a lawn, and that it is made up of bacteria, yeast, and fungi. 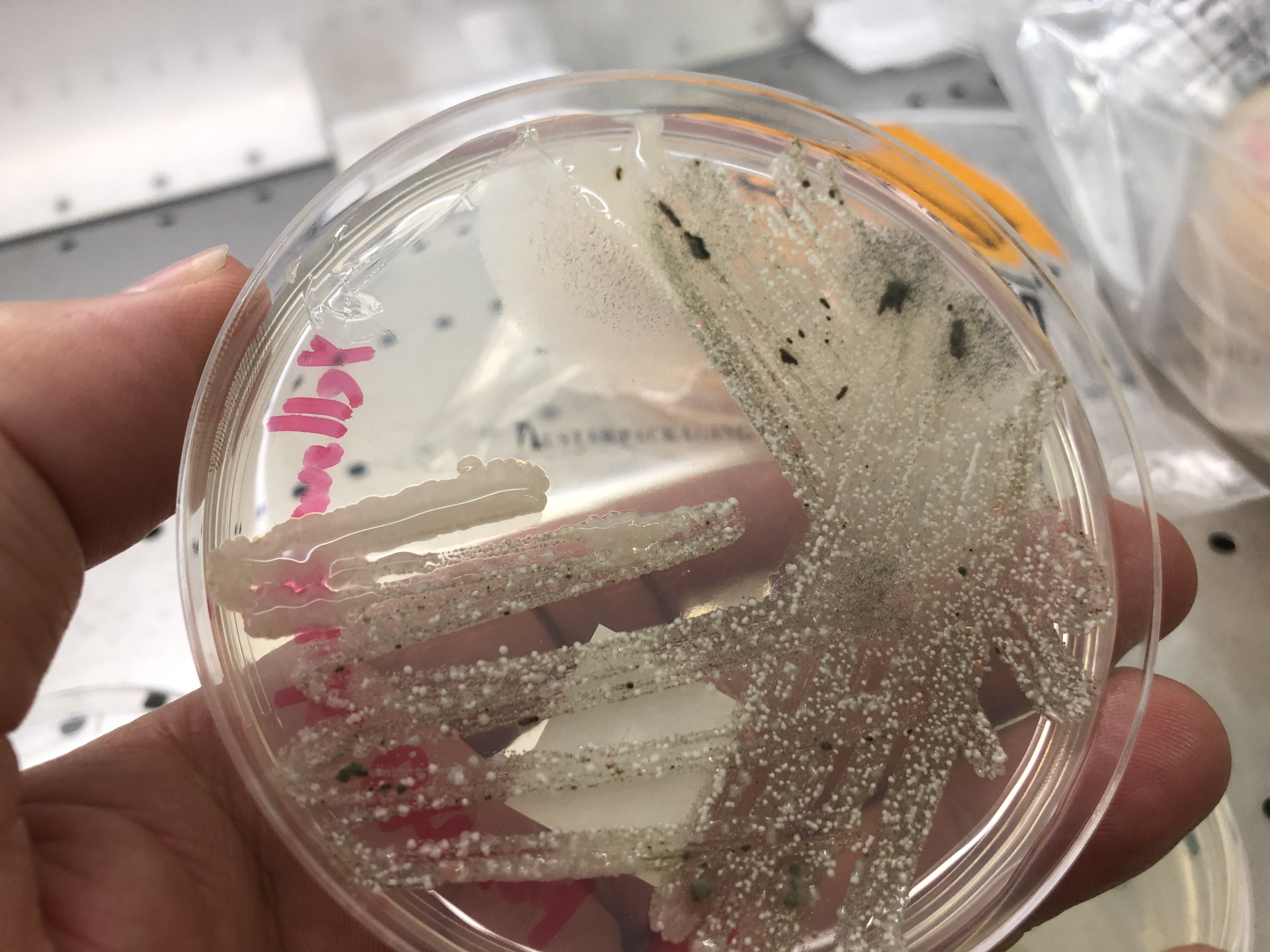 And so we're going to jump straight into this now. How does this actually happen? Because obviously when you purchase a new bath toy, you assume that it is reasonably clean. Well, the ways in which these bath toys become contaminated is from the plumbing itself. So the house and the water that is coming into your property has a background level of microbes in it. Now, this is entirely normal and nothing to be concerned about, but the toy itself, yep the plastic toy itself. Many of the plastics that make up these toys are biodegradable. They've got plasticizers and oxidants and antioxidants in them and they can be used as a food source by bacteria, yeast, and fungi. And so at the reasonable ambient and higher temperatures of the bathwater, the plastic breaks down, and this happens quite quickly and is a well-known problem. So there are advocacy aspects to this as well. 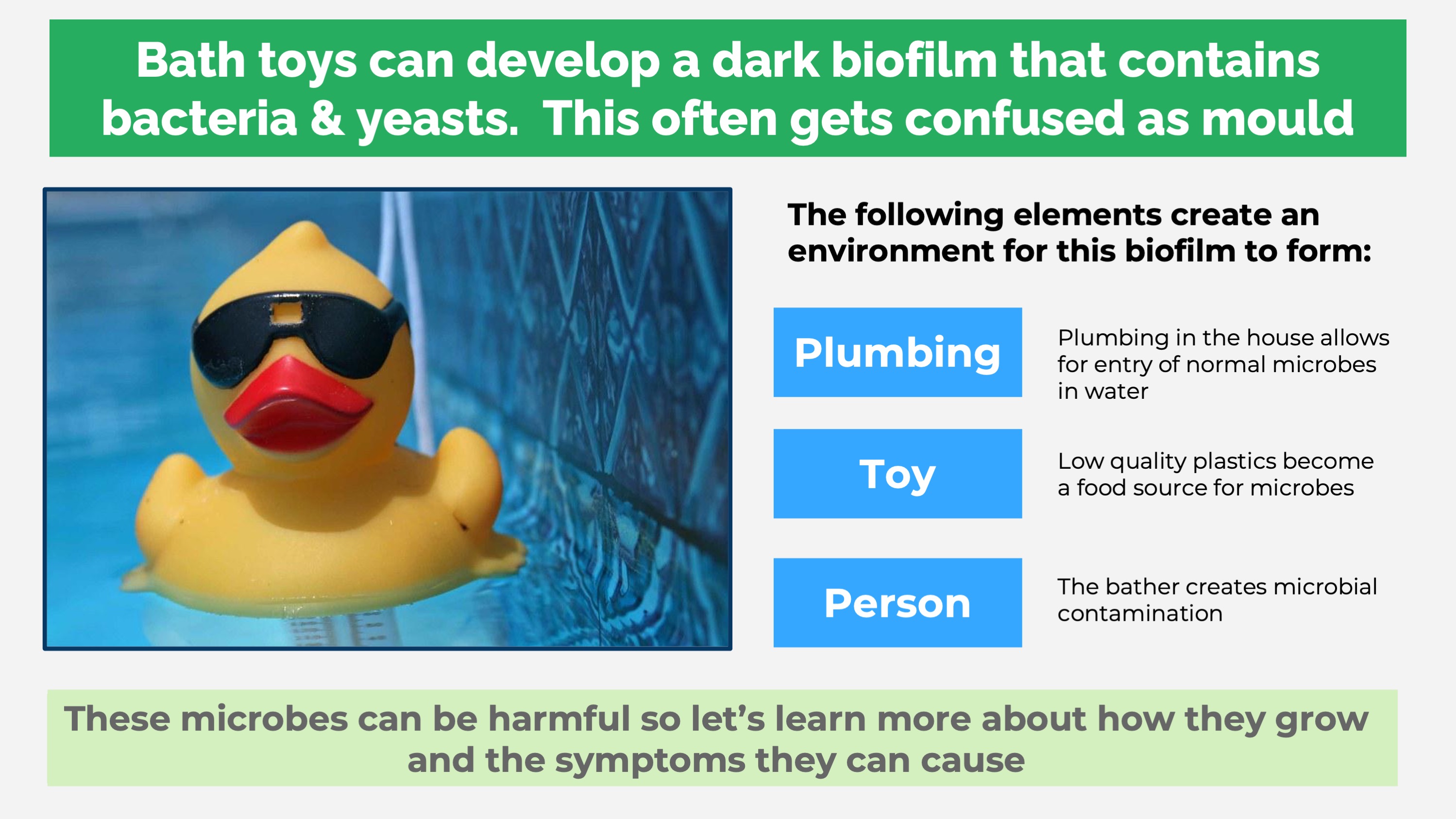 And we'll get into that a little bit later, but also the person who's in the bath also contributes to the microflora that's found in the bathwater. And then this gets into the inside of the plastic toy and grows the biofilm quite quickly. Now, these microbes are not altogether pathogenic. And as we saw in the Livestream last week, that approximately 1400 microbes and known to be pathogenic, but in a sense, the background statistics are that really only one in a billion different bacteria has the potential to cause harm to us.

Now, I am going to go through the different types of bacteria, yeast, and fungi that I was able to recover at culture when we went through a whole range of different bath toys. And I'll jump into that now. The most concerning one is obviously something called Pseudomonas aeruginosa. These are commonly found all around us.

The next microorganism, which I was able to recover from these toys was something called Exophiala. Now, this is a black yeast, and it is commonly found in homes anyway, especially around the rubber seals of dishwashers or in washing machines, but it is known to cause infections and respiratory issues and especially susceptible are cystic fibrosis patients. But of course, this means that this black yeast is particularly dangerous for anyone who has any type of immunocompromised situation. And we all know from COVID this year that anyone can be in a sense, having an immunocompromised state, if they're recovering from even a cold or flu.

Now the next microorganism, which appeared very early on these Petri plates and it is called Enterococcus faecalis, and it is this greeny colored bacterium. And this one is so easy to identify in the microbiology lab because it smells of stool and if you can follow my word picture here. A child gets into the bath is washing him or herself. And obviously, these enteric or gastrointestinal microbes find their way into the bathwater. And eventually inside the rubber bath toy, which is particularly concerning. 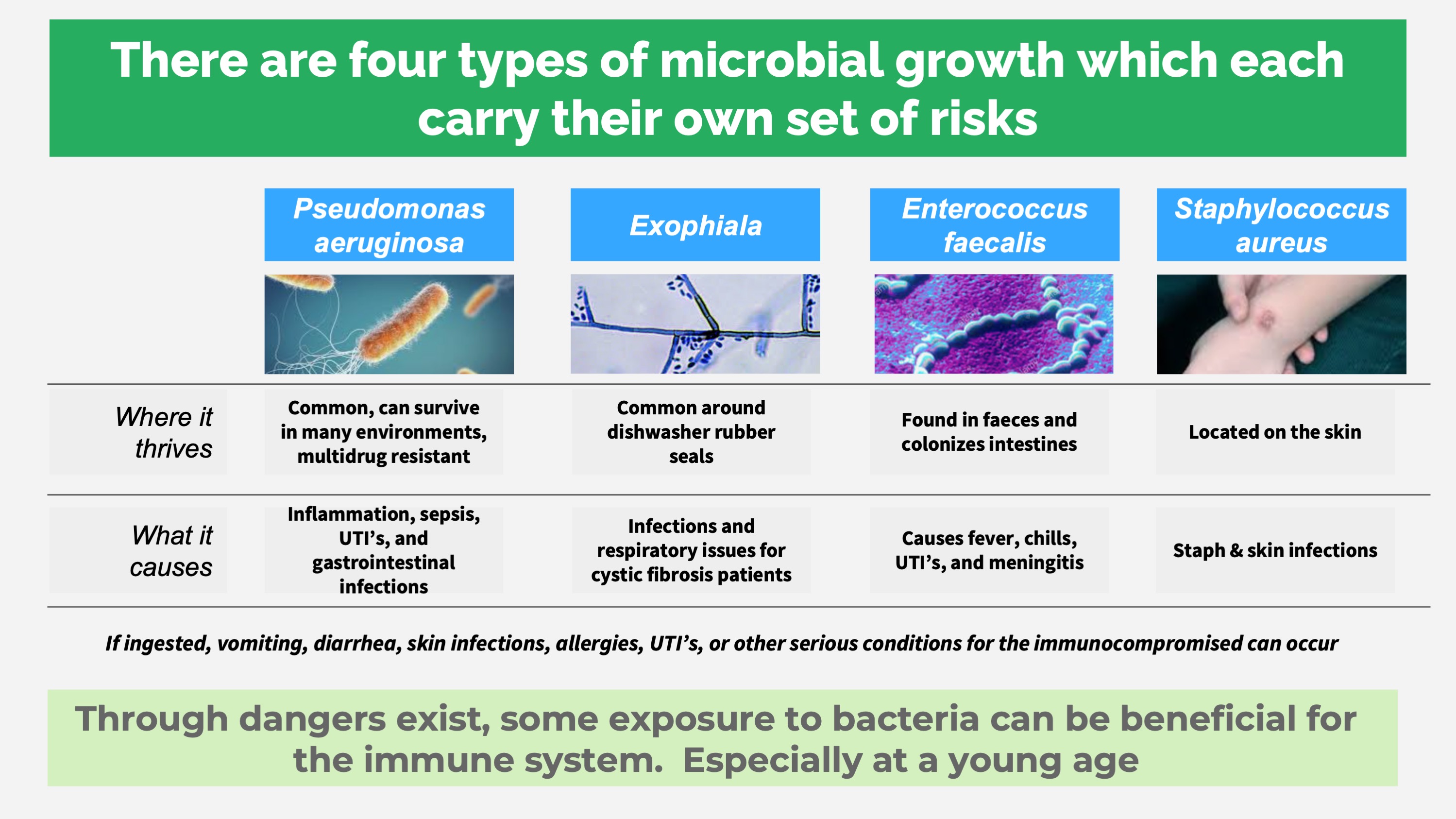 Now, all of you are probably wondering how you can protect yourself because it is a lot of fun to play with these. And certainly, when my daughter was young, she liked playing with all sorts of plastic and rubber bath toys in her baths, not just rubber ducks, but lots of others as well.

I should say that something which we didn't get to cover in-depth is that I also took some swabs from these foam toys as well. And there would different bacteria and yeast and fungi shown on this. And I have to say on a total colony count, that is how many different types of bacteria, yeast and fungi. There were far fewer recovered from the foam toys, meaning that even with this quite quick experiment, it is suggestive that this might be better than a lot of these toys that often have holes. 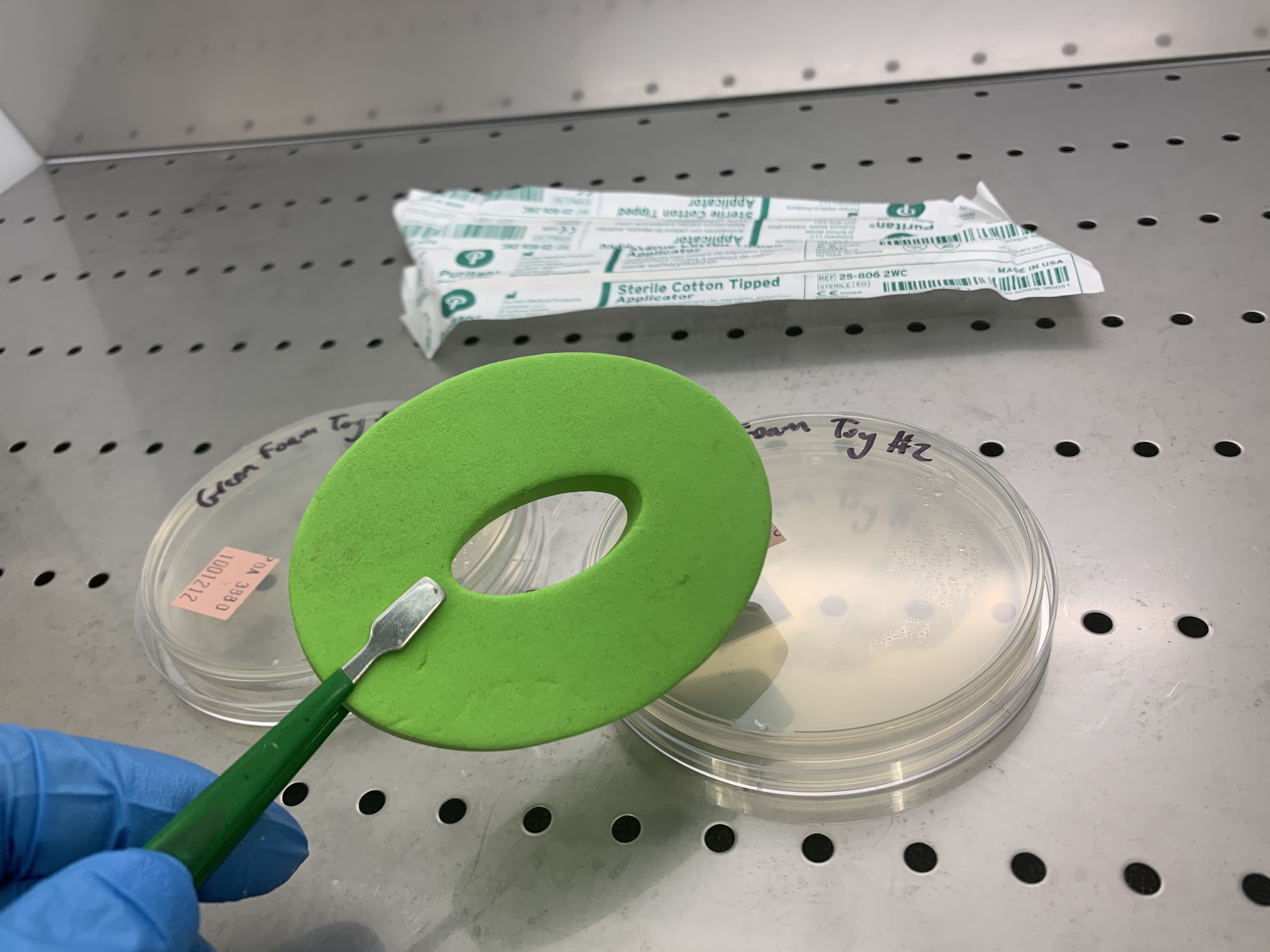 In any case. I want to tell you how you can protect yourself. Well, obviously potentially choose a toy that doesn't have a hole in it. Because if it doesn't have a hole on it, it can't take up the water and therefore the water often stagnates in there, and it's hard to dry them. If you want to improve hygiene and reduce the risk of exposure, then obviously you could consider disinfecting your toys. And you can do that in a couple of ways. The number one method is to dry and get rid of as much water inside the bath toy as possible.

You could consider boiling the bath toy or using boiling water on it. You could use a range of different chemical disinfectants, or you could physically alter the toy by plugging up any holes. There is legislation and advocacy, afoot worldwide to prevent or minimize poor and low-quality polymers being used in the manufacture of children's toys because it is known that this does quickly lead to biofilm formation. 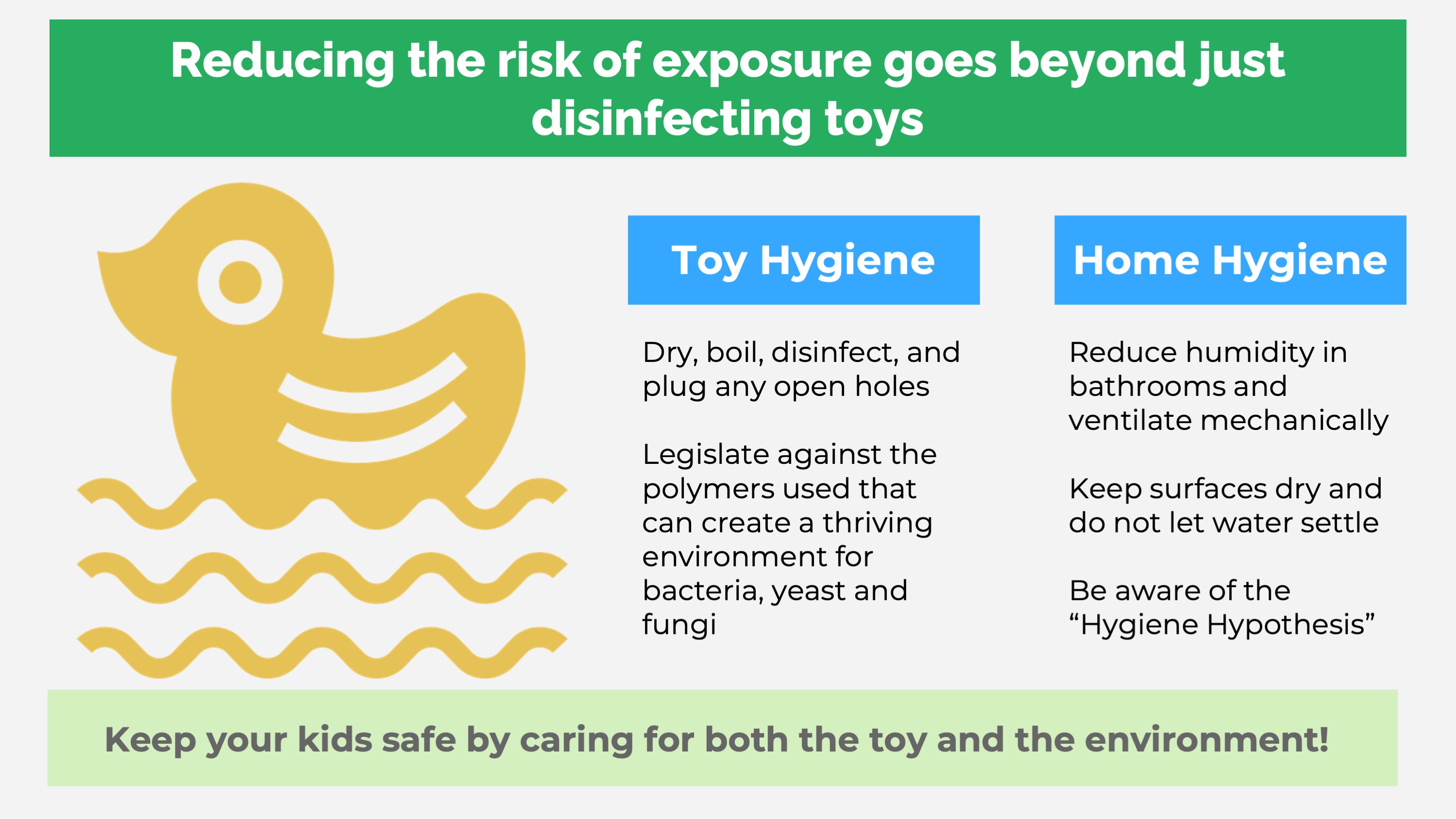 I should also say that not everyone who gets into the bathroom starts playing with the toy is going to get sick. And we need to talk about something called the hygiene hypothesis, because being exposed to bacteria, yeast, and fungi, certainly at an early age, there's lots of literature out there that shows that this is very protective to children and improves their allergy response in a sense by priming their immune system.

So what we don't want is ugly biofilms forming in toys, which might remain in the toy and then be played with again, which could then expose that particular child or individual to high concentrations of potentially pathogenic bacteria. But I'm not suggesting that we do away with all toys or stop bath time fun. I'm just suggesting that every family needs to, in a sense, consider what is their general agreed background level of microbes that they're happy with.

And we don't want to have conditions where biofilms form inside toys, which might look quite nice and playful on the outside, but contain a hidden menace. And that is the point of the show. The Mould Show this week. In any case, if you've enjoyed this, I'd encourage you to subscribe, give this video a like, share it with your friends, post it on newsgroups and make sure that you let other people know that biofilms are bad. We don't want them in our bath toys. And there are lots of practical things you can do to reduce the probability of biofilms forming.

In any case. My name's Dr. Cameron Jones, I'll be back next week, have a great week. Stay safe. Bye for now.

Strong, E. (2020). My son nearly lost his vision after an eye infection. Here's why you should be 'aware of the hidden dangers' lurking in bath toys. https://www.yahoo.com/lifestyle/mom-warns-parents-hidden-dangers-bath-toys-son-nearly-loses-vision-145625143.html