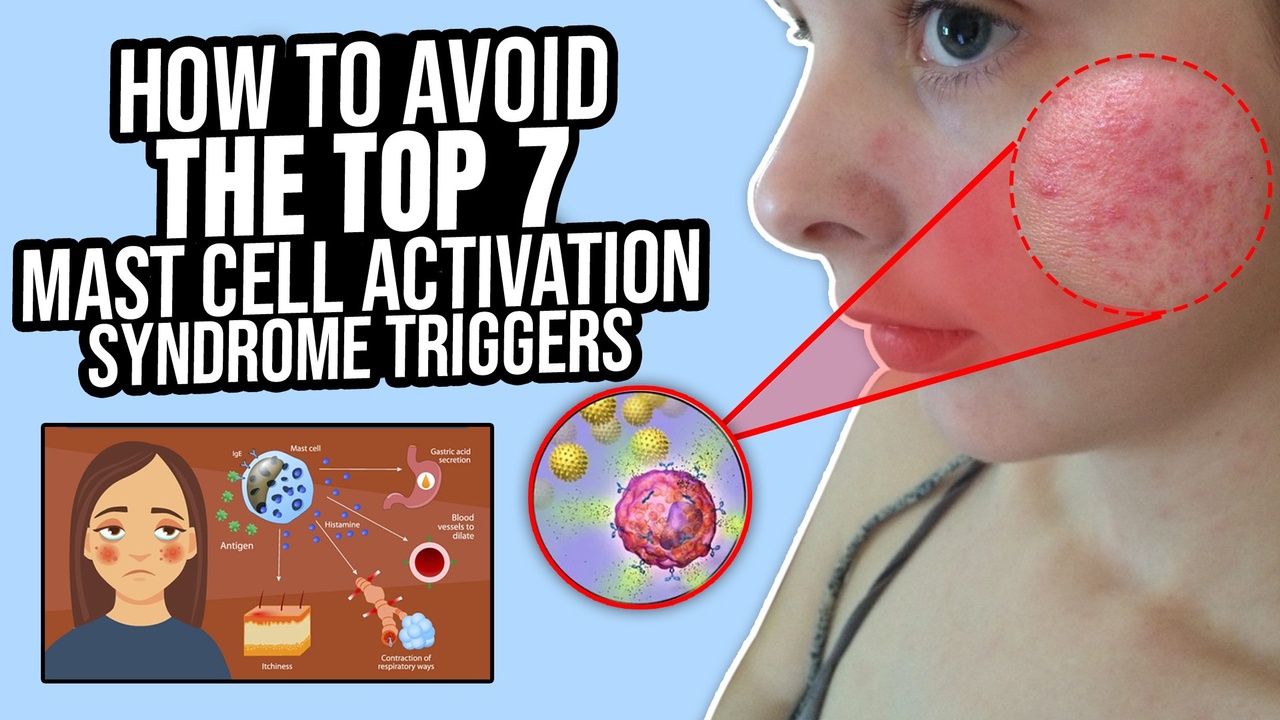 Hello, and welcome to this week's episode of The Mould Show, and today I'm going to be talking to you about something called Mast Cell Activation Syndrome.

Now you might not have heard of this before. Certainly, I was not that familiar with this topic or syndrome as well, and therefore I decided to put together this live stream to tell you all about Mast Cell Activation Syndrome. Why it's important and how it is related to environmental toxicity. And to set the stage for this, what we're going to be talking about today is how to avoid the top seven Mast Cell Activation Syndrome triggers. But as I said, you're probably wondering, how does this relate to me? What is it? Could I have it? And how is this related to water damage and mould? And as always, I like to use real-world examples.

So last week, a clinician referred a patient of hers to me in order to do a comprehensive indoor air quality and mould assessment of her apartment. And the reason for this was that she had been seeing this patient for a couple of years and she had a whole range of symptoms, which were congruent with something called Mast Cell Activation Syndrome. The problem is that she presented this case to her property manager and landlord, and neither party was taking her seriously and her symptoms were getting worse. She had clear evidence of water ingress into her apartment, but even with the letter from her medical doctor, this letter that I've got here, this was insufficient to prompt the property manager to do something to help this person.

So the doctor reached out to me to come in and do a comprehensive assessment of the property. And I'm going to tell you that yes, we did confirm that yes, the property was suffering from moisture ingress and accumulation from rising damp and a wall-mounted inverter was fully colonized with mould inside it. So the person was not crazy. But I want to use this as a real-world example to explore what Mast Cell Activation Syndrome is because in the letter, the doctor talks about a range of symptoms, which are a little bit more complex than just a runny nose or an allergic response to mould triggers that so often we focus on, the asthma type response.

And the only thing that the person living in this environment was able to find was that there was a strong mould smell. But the symptoms that she reported to the doctor included fatigue, and she was non-responsive to treatment for irritable bowel syndrome. And so I want to talk to you about how gastrointestinal upsets can be linked to exposure to environmental toxins, because this is a fundamental issue involved with Mast Cell Activation Syndrome and why it puts it apart from your standard allergy response and asthma response respiratory issue. So I'll go into that in a minute.

To define now, I want to talk about Mast Cell Disease, and to do this I want to explain what it is. It is a group of diseases involving the immune system. It affects people of any age or gender. It is often unrecognized and underdiagnosed. That means that many people presenting with this range of symptoms, which I'm going to explain in a minute, might be missed by their healthcare provider. And many people can have very serious life-threatening reactions, including anaphylaxis. And those who suffer from Mast Cell Activation Syndrome, one in four people cannot work or participate in normal day-to-day activities. 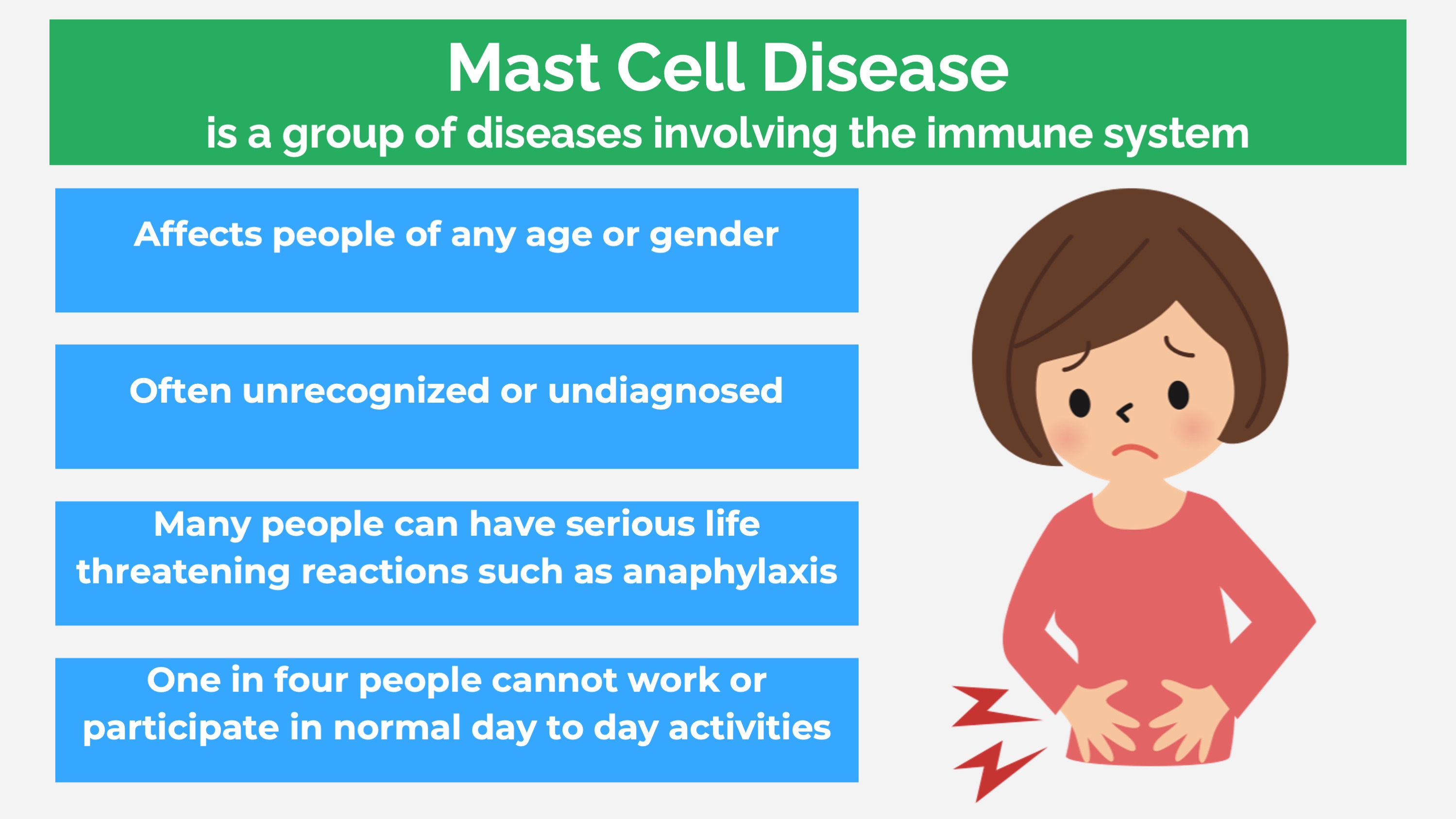 So as you can see, this is a very serious syndrome, and if we look at the symptoms that the doctor linked to exposure to the mould environment. She stated that the patients' migraines and headaches, hay fever, and even stress-causing premenstrual syndromes were linked to her exposure to the mould odour and the mould spores. But what other issues and symptoms are part of Mast Cell Activation? So what are they?

Well, we've talked about anxiety. The number one method is, in a sense, itching. There can be examples of headaches, brain fog, wheezing, shortness of breath, low blood pressure, and this issue of flushing or swelling. And you're probably thinking to yourself, "Well, how does that work? How do you end up flushing or swelling?" And it is related to this thing called a mast cell, which I'm going to define now. 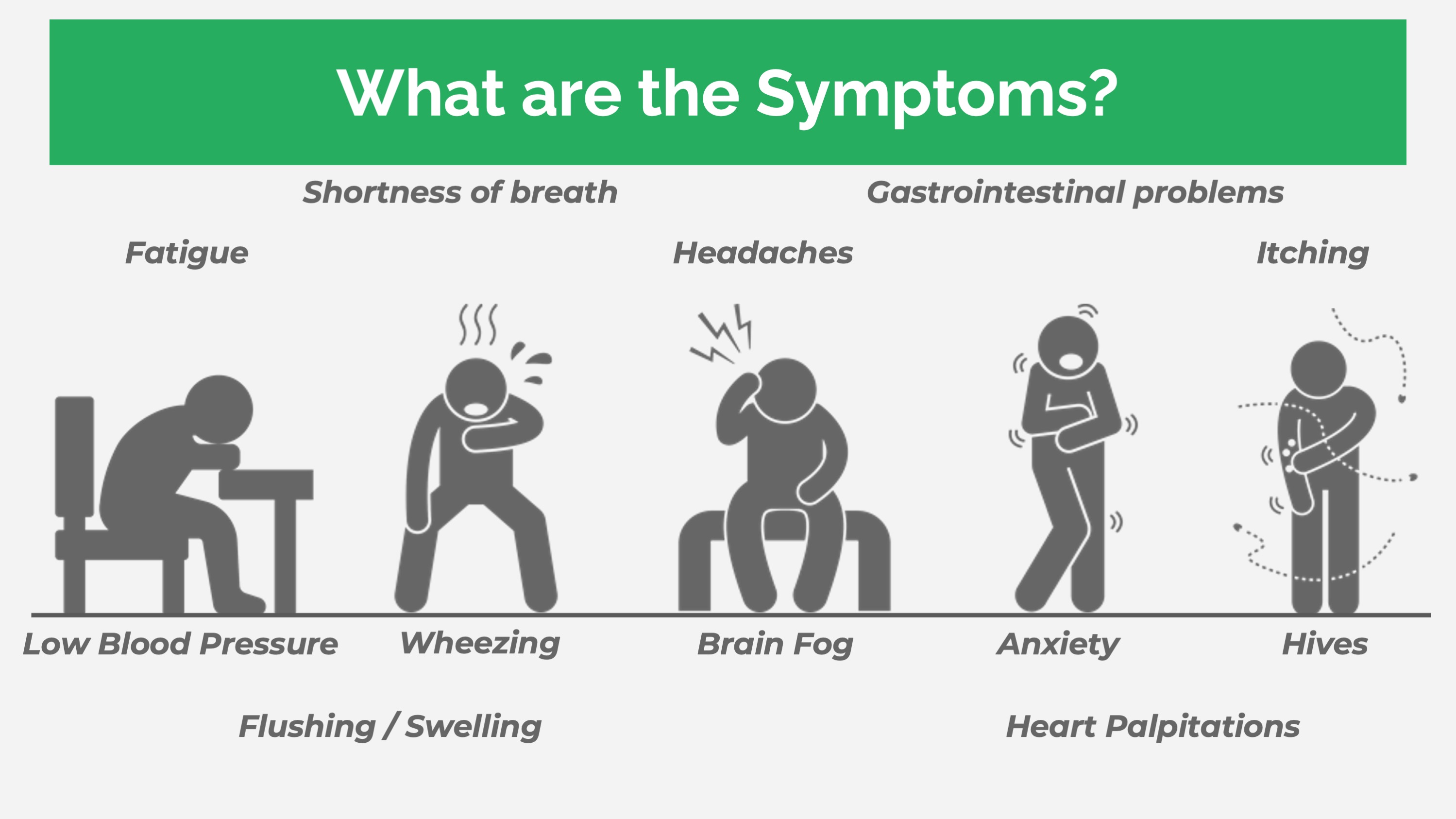 How do they become activated? Well, mast cells are present in your body. They are a component of your immune system. And if you have Mast Cell Activation Syndrome, the mast cells overreact and release too much inflammation. How does this occur? Well, foreign antigens are recognized and they create an IgE. That is an immunoglobulin E response, and the levels of mast cells raise in the body, which in turn causes a histamine cascade, meaning that blood vessels dilate and airways contract and you often end up with gastric acid secretion. So not only do you get itchy, there are changes due to dilation in your blood vessels, and that can lead to this characteristic reddening often seen on the face and the body, which is typical of Mast Cell Activation Syndrome. 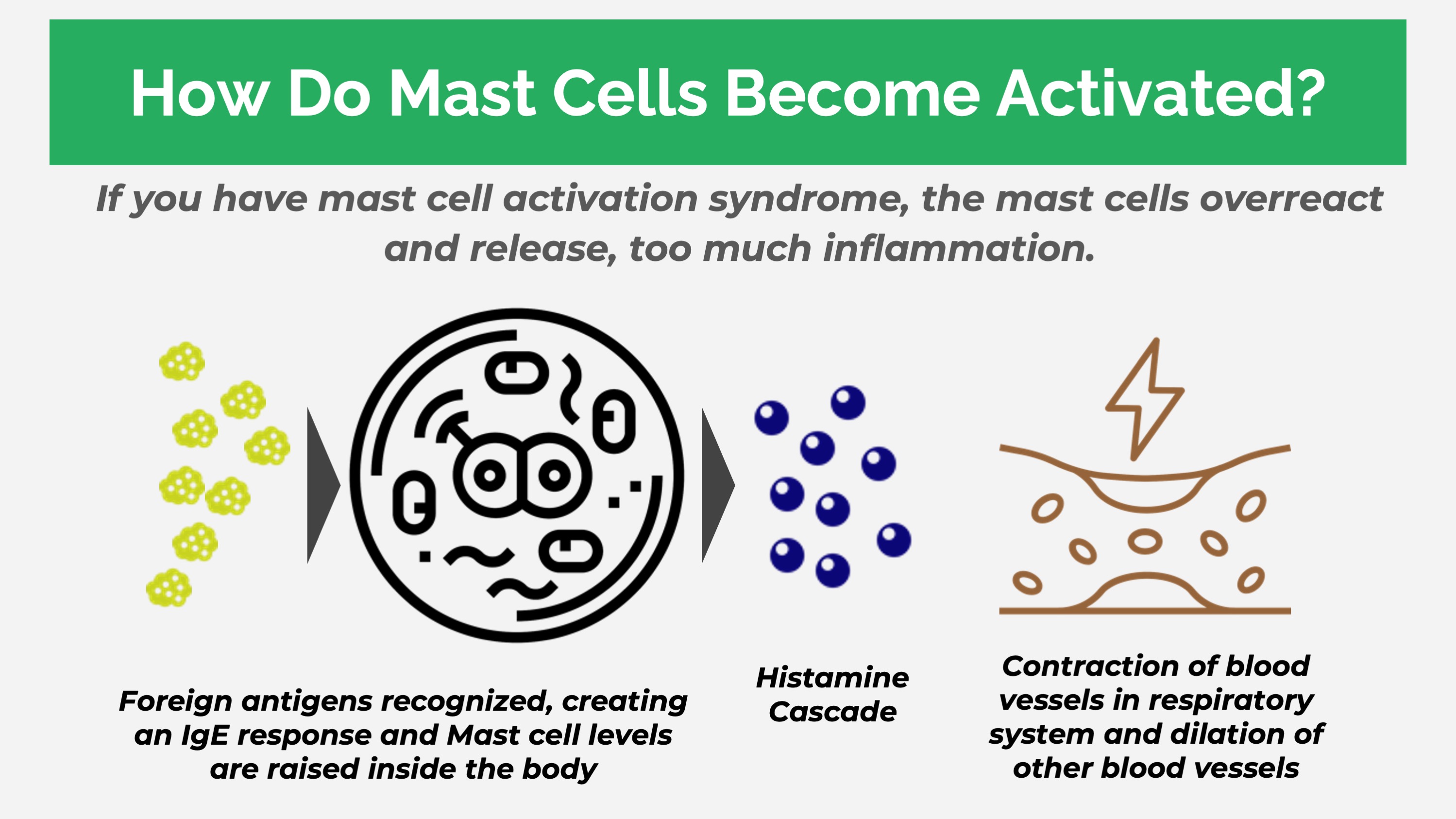 Now you're probably wondering, "What are the seven common triggers?" Because knowing what these seven common triggers do allows those individuals that are potentially exposed to water damage and mould to take some proactive action to potentially reduce the levels of mast cells in their body. And I urge you to discuss this with your healthcare provider, functional medicine doctor, or integrative medical practitioner or naturopath, who will be very familiar with Mast Cell Activation Syndrome.

Now, we'll go in turn from one to seven through the top seven triggers to avoid, and number one is foods containing histamines. Now, what do I mean by histamine containing foods? Well, many packaged foods contain higher levels of histamines, including gluten-free foods. So you definitely do need to talk to your healthcare provider about limiting your exposure to packaged foods and those foods that naturally have high levels of histamines in them.

Now the second issue is avoid infections and toxicity. Now, what do I mean by that? Well, anyone who understands water-damaged building interiors understands that exposure to mould cells and mould fragments and volatile organic compounds and mycotoxins and guttation droplets secreted from growing or active fungi can lead to toxicity reactions. But many people with Mast Cell Activation Syndrome also have Lyme-type or Lyme-like underlying illnesses and many people already have Candida overgrowths, and that may also be due to other underlying pathologies. But these toxicities and other infections predispose individuals to Mast Cell Activation Syndrome.

Now, genetic factors. Now, when I mention genetic factors there, to my knowledge, isn't a gene that switches on Mast Cell Activation Syndrome, but all of us are exposed to numerous toxic chemicals out in the environment or the workplace. And typical studies have shown that we are exposed to 80,000 toxic chemicals throughout the course of our life, and this creates a lot of stress on our chromosomes, which of course have to divide all the time to continually replenish our organs and bodies. And in so doing, we can end up with small genetic changes, which have an impact on the proteins that our cells secrete. And that is particularly important to realize that the more toxic the environment, the more likely there is stress on the genetic system of yourself leading to Mast Cell Activation.

Now the fourth issue is nutritional deficiencies. Remember I said that blood vessels dilate and that gastric acid secretion certainly is elevated in those with MCAS, or Mast Cell Activation Syndrome. And these underlying gut issues, like for example, colitis, proctocolitis, or Crohn's disease, means that nutrients are not properly absorbed. Therefore, it's very important that you consult with your healthcare provider and use or take advantage of appropriate lab testing as required to check for nutritional deficiencies.

Now, one of the next issues or triggers for Mast Cell Activation Syndrome is low oxygen, and you might be thinking, "I breathe normally, aren't I getting enough oxygen?" Well, remember also that mast cells interfere with airways. They can become contracted, and when that occurs, individuals may have interfered sleep patterns, sleep apnea. Not only does that cause changes to the cortisol levels, but it changes the amount of oxygen in the blood, which then impacts on iron absorption as well. And all of this causes big, big problems to the individual and causes stress, and that's one of the fundamental problems associated with mast cell triggering.

Now the next sixth trigger to avoid is hormone imbalances. And of course, women are particularly susceptible to these issues because estrogen is linked to mast cell production. And of course, cortisol and stress also affect mast cells, therefore appropriate lab testing for hormones like estrogen and progesterone, as well as cortisol may be appropriate in diagnosing whether the individual is in fact in a stressful environment invoking these Mast Cell Activation Syndrome issues.

Now, let's take the final trigger to avoid, and that is stress and early trauma. Now, mast cells overreact when they are in any of these seven triggered situations and it causes inflammation, and the reason for this is that really we can't avoid being exposed to stress. And obviously with COVID in the last year, there are a whole lot of events and positive expectations and negative expectations that we've all been unwillingly or are unwanted and they cause stress. And whenever the body is under stress, it does create changes in the level of cortisol and there is an upheaval going on and this can lead to inflammation when an individual is put into an environment with water damage and mould and leading to this unwanted problem of Mast Cell Activation Syndrome. 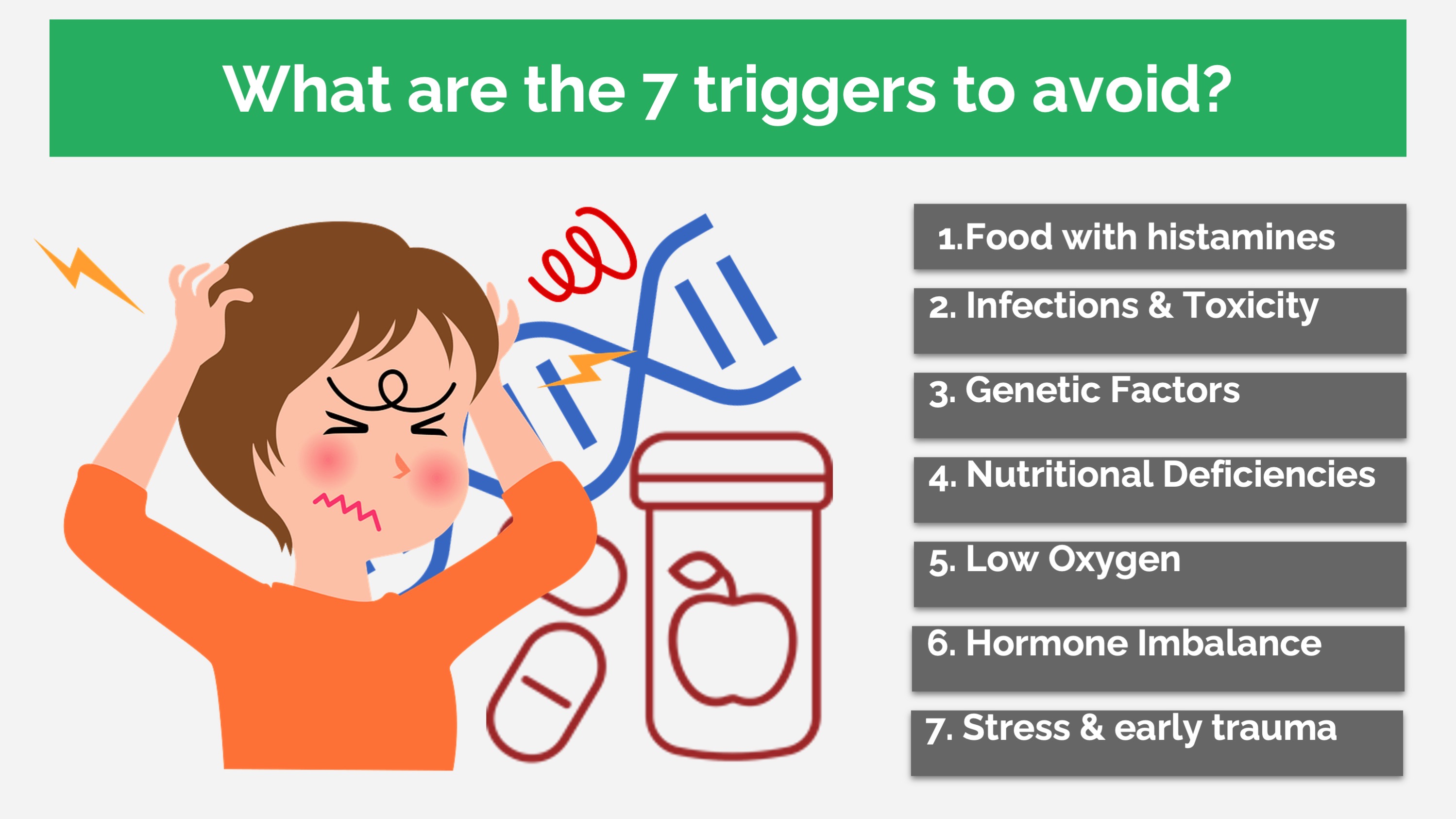 In any case, I hope today you have a better understanding of what Mast Cell Activation Syndrome is. You can understand that it is a stress on the body, which leads to an elevation of mast cells, which in turn create a cytokine response and that they are histamine-driven inside the body. So you want to take advantage of knowing what these seven triggers are to make every effort to reduce your own likelihood of experiencing this unwanted and really awful syndrome.

In any case, the doctor stated at the end of the day, her letter, that, "On medical grounds, so-and-so should move out of her apartment as soon as possible." And I point this out because the doctor wanted me to come in to collect really good, scientifically valid credible information regarding the levels of mould spores, the level of water damage, the level of visible and non-visible surface mould inside the apartment. Because even with the medical letter, the landlord and property manager weren't doing anything to help her, were holding her to the conditions and terms of the lease and this particular lady was severely stressed and felt like she was going crazy. She wasn't, the science-backed up the medical expectation, and I'm very pleased to say that I have been told that she's had a much more positive reception and outcome to her case.

In any case, I may take this up a little bit later if I can, depending on the civil claim that may or may not ensue from this. In any case, my name's Dr Cameron Jones. I deal with water damage and mould exposure every week and I'm passionate about empowering people to take advantage of the science, take it out of the journals and make it useful. In any case, have a good week, stay safe and I'll see you next week. Bye for now.